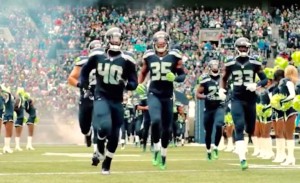 The Seattle Seahawks are planning a team-wide “demonstration of unity” prior to their game Sunday against the Miami Dolphins.

According to a report by ESPN, the Seahawks support San Francisco 49ers quarterback Colin Kaepernick, and have been mulling a similar, team-wide protest.

“”We’re thinking about it. I am,” said Seahawks defensive end Cliff Avril in the ESPN report. “I truly respect what Kaep is doing. I think some people are taking it out of context because they’re not experiencing the same thing other people are experiencing.”

Seahawks wide receiver Doug Baldwin took to Twitter Thursday to discuss the nature of the demonstration.

To express a desire to bring people together, our team will honor the country and flag in a pregame demonstration of unity.

The Seahawks have apparently consulted with Nate Boyer, a former Green Beret who played college football for Texas and spent some time with the Seahawks last year as an undrafted rookie. Boyer spoke to Colin Kaepernick about his protest and as a result, the 49ers quarterback decided to kneel for the Anthem, rather than sit. Whatever the Seahawks have planned for Sunday evidently has Boyer’s approval.

Talked to the @Seahawks What the team will do is a powerful sign of unification + respect for the Anthem + those that fight for our Freedom!

Prior to Thursday night’s NFL season opening game between the Broncos and the Panthers, Denver linebacker Brandon Marshall took a knee during the playing of the Anthem.