Seth Rogen to NFL Commish on Ray Rice: ‘Get Your Head Out of Your F*cking Ass’
VIDEO

Seth Rogen to NFL Commish on Ray Rice: ‘Get Your Head Out of Your F*cking Ass’ 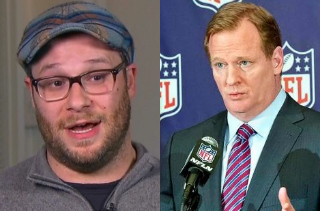 On Monday, TMZ released surveillance footage of Baltimore Ravens running back Ray Rice knocking his fiancée out cold in an Atlantic City elevator earlier this year. When news first surfaced of the incident, the NFL decided to suspend him for just two games.

After a substantial amount of uproar, the league’s commissioner, Roger Goodell, apologized and announced a new policy for NFL players. Moving forward, a first offense will mean a six game suspension without pay. Two strikes, and players will be banned from the league for life.

While that revised stance may have appeased some, the emergence of the video is sure to reignite the rage. Exhibit one is actor Seth Rogen, who had this to say about the matter on Monday:

I don't know much about football, but I know that Ray Rice is a piece of garbage who shouldn't be allowed to play it professionally anymore.

His follow-up message, directed squarely at Goodell, was retweeted more than 4,500 times in just over an hour:

.@nflcommish your punishment for beating a woman is less than for smoking weed. Get your head out of your fucking ass.

This is exactly what the NFL does not want: Celebrities with a wide reach, who normally would not have anything to say about football, pointing out the problem with the status quo when it comes to domestic abuse.

As a reminder, here is the video of what Rice did to his fiancée, via TMZ: