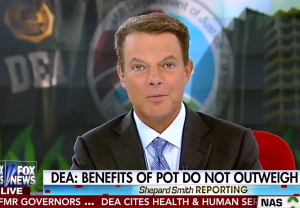 Today, Fox’s Shep Smith reported the news that the Drug Enforcement Agency has decided to keep marijuana a Schedule I drug and he reacted to it, too. Back in April, it looked like they really were planning to reschedule the drug, which is currently classified at the same level of danger as MDMA and heroin. The sarcasm and contempt in Smith’s voice when he said that were palpable. (Vicodin and OxyContin are listed as Schedule II, meaning the DEA sees them as much less serious, dangerous, and addicting.)

Smith’s segment today wasn’t the first time a Fox News show has openly questioned the American weed prohibition, but it was pretty biting. Before going to commercial break, he scathingly compared harder drugs with a “plant that grows in the yard.” Watch this:

At one point, Smith sarcastically said, “DEA officials also say that marijuana’s benefits do not outweigh the risks […] LSD, MDMA, weed — it’s all the same thing. Thanks, DEA. You’ve really got a lot of credibility.”

His guest, Fox News legal analyst Mercedes Colwin, pointed out that in spite of widespread decriminalization, time and resources are wasted every year on arrests and enforcement of anti-weed laws. She said, “Now it’s becoming a fiscal reality. Do you know what it is to try to manage marijuana when you do these types of arrests? 700,000 people get arrested. It costs $10 billion to this country to just manage these infractions […] so someone at the federal level is saying, ‘We have to do something about this.'”

“Is it weird to you that it’s such a big part of the economy — and it is: you can order weed, I’m told, as quickly as you can pizza in big cities — and yet it’s not taxed and it’s not part of our economic system?” asked Smith. “I don’t understand why that product should be eliminated.”

Watch above to see Smith and Colwin talk about taxes and weed delivery (as Smith is told). Watch out for him scoffing, “It’s not like they’ve stopped it in places where it’s illegal!”