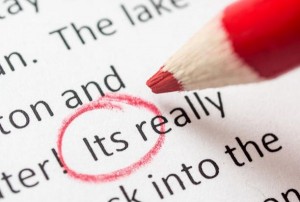 In other news, water is wet. Researchers at the University of Michigan have just published a study that says people who sweat small grammatical errors aren’t as nice as people who could care less if your going out fore dinner tonite, to. Based on responses from 83 participants who are graded on a self-scoring personality test, the study found that people who don’t mind hot grammatical messes are “more agreeable” than those who do:

The study, published in the journal PLOS One, then speculates that the difference between the two groups may be “perhaps because less agreeable people are less tolerant of deviations from convention.”

Introversion/extroversion and conscientiousness also had some correlation with how grammar errors were perceived.

According to the study, participants were paid a dollar each, which will also make a finicky a-hole cranky.

With such a small sample, there’s obviously a need for more research, so if you’d like, go take the personality test, then tell us in the comments what you would think of a person who sent you this email in response to an ad for a roommate:

Hey! My name is Pat and I’m interested in sharing a house with other students who are serious abuot there schoolwork but who also know how to relax and have fun. I like to play tennis and love old school rap. If your someone who likes that kind of thing too, maybe we would mkae good housemates.

I’m not sure if this will so much test who is more tolerant of bad grammar as it will what kind of person likes to study for midterms next to a pile of sweat socks with Kool Moe Dee blasting on the stereo, but it’s Friday. Let’s do this anyway.