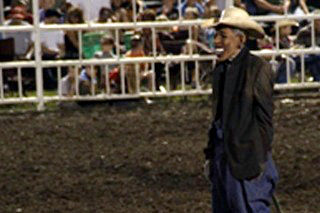 Eight seconds was about all it took for state officials and the Missouri State Fair itself to condemn the use of a rodeo clown dressed up like President Barack Obama.

Video of the incident, which went viral Sunday night, shows the clown taunting bulls, and a report of the incident claims an announcer stoked the crowd by asking if anyone wanted to see Obama get run over.

“I know I’m a clown, he’s running acting like one, doesn’t know he is one!” another rodeo clown said of the Obama clown.

“The State Fair is funded by taxpayer dollars, and is supposed to be a place where we can all bring our families and celebrate the state that we love,” Missouri Senator Claire McCaskill said. “The young Missourians who witnessed this stunt learned exactly the wrong lesson about political discourse—that somehow it’s ever acceptable to, in a public event, disrespect, taunt, and joke about harming the president of our great nation.”

The @MoStateFair celebrates Missouri and our people. I condemn the actions disrespectful to POTUS the other night. We are better than this.

I love the @MoStateFair and will attend this week. I implore @GovJayNixon to hold the people responsible for the other night accountable.