Steven Tyler, Magic Johnson, and the Other 47 Accounts Donald Trump Follows on Twitter 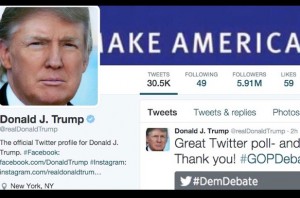 The official @POTUS Twitter account for President Barack Obama blasts daily messages out to an impressive 6.09 million followers; often deemed the first “social media President,” Obama’s numbers on the platform speak to his celebrity and engagement as a populist politician.

Right on his heels? None other than Donald J. Trump: Republican frontrunner, “racist eater of burgers“, and occasional skipper of debates, with 5.91 million Twitter followers.

Even more curious than his massive social media following is the staggeringly low number of Twitter accounts that Trump follows — only 49, far below the average of any other candidate seeking the Presidency. We’ve dug in to Trump’s follows and found some interesting reveals.

For instance, Aerosmith frontman Steven Tyler is one of the lucky few. Despite somewhat sparring with the singer in October over the rights to use the song “Dream On” for campaign events, Tyler’s account — @IamStevenT — is still followed by the real estate mogul.

Then there’s basketball great Magic Johnson, who has been long rumored to replace Trump as the new face of the Celebrity Apprentice television franchise. Other random celebrities included in the hallowed list of 49 are Mark Burnett, the television producer who has helmed everything from Survivor, Shark Tank, and yes, even The Apprentice (are you starting to see the trend here?). Celebrity Apprentice producer Roma Downey is there as well.

Then there’s the unmistakable windfall of Trump-brand properties that comprise 30% of Trump follows:

That’s 15 of 49 accounts that include the man’s name directly. Who ever said narcissism was a bad thing? This is “yuge” stuff here, people!

But it’s not all about the man himself; he sacrifices a few “Follows” for his family too of course. Accounts like @Ivanka Trump, @DonaldJTrumpJr, and @erictrump all earn the distinction as well. His wife Melania Trump is also there, which I imagine would make for awkward gold-plated dinner conversation otherwise.

As for members of the media — which Donald Trump has largely decried as untruthful or perhaps deserving of a 5th Avenue shootout — there are a small handful of distinguished journos Trump follows as well.

Both cohosts of MSNBC’s Morning Joe — Joe Scarborough and Mika Brzezinki — make the cut. Piers Morgan as well makes the Gang of 49, as do quite a few Fox News personalities: Greta Van Susteren, Geraldo Rivera, and Eric Bolling. Bret Baier, who moderated the debate last night, was probably sad to see his pal Trump absent from the Des Moines event, but he can take solace knowing that Trump follows him too on Twitter. Toss Sean Hannity, Fox Nation, and the official account for the morning show Fox & Friends into the mix, and suddenly the connection between Donald Trump and Fox News would seem strong despite his claims to the contrary.

Then there’s his vanilla milkshake buddy Bill O’Reilly, who surprisingly just falls short of the one million Followers distinction himself. But really, when you’re lucky enough to count yourself among the few who can say you’re followed by the great Trump on Twitter, does it really matter?

Also, Robert T. Kiyosaki, who may not be a household name but is an entrepreneurial titan of sorts. Kiyosaki coauthored “Why We Want You To Be Rich” with Trump in 2006, which we know isn’t as good as “The Art of the Deal” since THAT’S the greatest book ever written (aside from the Two Corinthians in the Bible, of course).

How about a few campaign staffers to boot? Daniel Scavino, Jr., the Senior Advisor for the Trump campaign, makes the list. And everyone’s favorite bullet-wearing campaign spox Katrina Pierson is also followed by Trump (shame on you if you don’t think Pierson has earned a Follow by now from the big guy). Campaign Manager Corey Lewandowski and Apprentice alum/campaign staffer Tana Goertz are also Followed by @realDonaldTrump, as is EVP Michael Cohen.

Oh yes, we can’t forget the Stump4Trump girls @DiamondandSilk, who made an appearance alongside the real estate mogul last night at his event at Drake University.

Deport-Nikki-Haley champion Ann Coulter is of course on the list too, as is the Business Insider account and Katrina Campins, an Apprentice vet and TV personality in her own right. Frequent Breitbart contributor and Tea Party Patriots cofounder Jenny Beth Martin has also earned a Follow.

And finally, my personal favorite celebrity account that Donald J. Trump follows on Twitter: Vince McMahon, the Chairman and CEO of WWE, who had his entire head shaved by Trump and Stone Cold Steve Austin at the epic conclusion of WrestleMania 23 (you’ll really want to read Mediaite’s original piece on that fiasco here — trust us).

So there you have it: all 49 accounts on Twitter that Donald Trump follows. Not a single politician or world leader makes the list, but really, when you set your own rules to play by in the election, you can kind of buck the trend any way you want.

And for the record: 11 of those 49 accounts also follow Mediaite, which is a great time to plug @Mediaite for the latest and greatest in politics, cable news, and obscure Twitter analytics.

J.D. Durkin is the Senior Editor of Mediaite. He is not followed yet by Donald Trump, but you can follow him on Twitter @MediaiteJD.