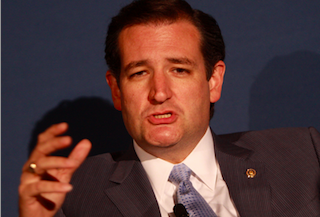 As more and more states line up to advance marriage equality for the LGBT community (Virginia was the latest to have its gay marriage ban deemed unconstitutional), Sen. Ted Cruz (R-TX) is doing everything he can to halt that progress. He recently introduced the “State Marriage Defense Act,” which would eliminate the federal benefits same-sex couples received after the Supreme Court overturned DOMA last year.

On Thursday, Cruz appeared on Washington Week, a radio show hosted by the conservative Family Research Council’s Tony Perkins, to explain his stance on the issue. “Our heart weeps for the damage to traditional marriage that has been done,” Cruz said. He described the “best environment for a child” — one with both a mother and father — as being “under attack.

“We need to stand up I believe, and defend traditional marriage,” he continued, “and especially do everything we can to prevent the federal government from forcing a different definition of marriage that is contrary to the views to the citizens of each state.”

Cruz agreed with Perkins suggestion that the Obama Administration is “trying to lock this in quickly hoping that it cannot be reversed.” He then connected the administration’s work to grant federal rights to couples who have been legally married in their own states to the president’s “broader pattern of abuse of power and lawlessness.”

Listen to audio below, via Washington Watch: