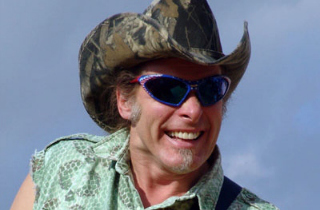 Never one to mince his words, rock musician and National Rifle Association board member Ted Nugent took to his WorldNetDaily column this morning to tear into President Obama as being in support of criminal justice system “that daily unleashes monsters back out on the street” while simultaneously “disarming law-abiding citizens.” He asserted that liberal anti-gun activists seek to “rape our Constitution” and “urinate” on the vision of our Founding Fathers.

The column, entitled “Real Assault Weapons: Maggots Who Belong In Cages,” made the author’s case that while Obama and other gun control advocates lobby for stricter background checks, they overlook the real problem: Our “victim injustice system,” as Nugent described it.

As a result, he said, the anti-gun left has adopted an “anti-American” and “morally bankrupt agenda” that seeks to “rape our Constitution and urinate on the vision of our Founding Fathers.” He explained:

“The real central issue that all Americans with common sense understand is about keeping violent maggots in cages and not disarming law-abiding citizens.

“This is why the NRA and good, decent Americans don’t trust the president and his anti-gun crazies. To focus their efforts on restricting the rights of law-abiding Americans instead of doing whatever they can to revamp a system that daily unleashes monsters back out on the street where they will commit more heinous, unspeakable crimes is the worst crime of all.

“The cops, prosecutors, judges and prison officials know who these monsters are. Knowing that they will more than likely commit more vicious crimes, the “system” unleashes them anyway.”

“Clearly,” Nugent wrote, “their agenda is banning guns, not banning criminals or saving lives. And their morally bankrupt agenda is wrong, anti-American and counterproductive.”