‘Texts From Hillary’ Goes Out On Top

‘Texts From Hillary’ Goes Out On Top 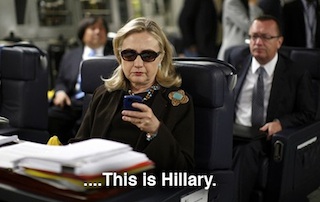 The creators of the Tumblr sensation Texts From Hillary have decided to call it quits, and end the blog during the height of their success. Just yesterday, Secretary of State Hillary Clinton met with the creators in person and submitted her own contribution to the site.

Adam Smith and Stacy Lambe made their final curtain call with one last entry, entitled TTYL:

It’s been an overwhelming—and hilarious—week for us here at Texts from Hillary (TFH). What started as a joke at the bar between two friends turned into a national conversation about Secretary Clinton and went as far as talks about 2016.

After a week that included 32 posts, 83,000 shares on Facebook, 8,400 Twitter followers, over 45K Tumblr followers, news stories around the world, Renee Montagne from Morning Edition saying “ROFL,” a Maureen Dowd column, and a tweet from ?uest Love, we think it’s time to stop while we are ahead.

As far as memes go – it has gone as far as it can go. Is it really possible to top a submission from the Secretary herself? No. But then when you get to text with her in real life – it’s just over. At least for us. But we have no doubt it will live on with all of you on the Internet.

The site will stay up but we won’t be posting anything new here. You can follow us on Twitter (@ASmith83, @Sllambe) and Tumblr (Stacy at ImWithKanye and Adam’s work account, Public Campaign Action Fund).

Thanks for all the LOLz. We truly appreciate all the support.

It turns out that memes really do come true.