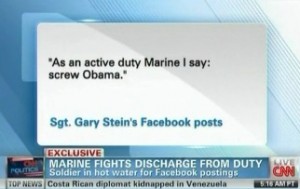 President Obama has a seemingly unlikely defender from Sgt. Gary Stein, the Marine who faces other-than-honorable discharge for comments he made on Facebook. Erick Erickson, CNN contributor and Chief Editor of the influential conservative blog Redstate.com, blasted Sgt. Stein on his blog’s pages, and said he is “appalled at some conservatives out there rallying around the guy.”

Sgt. Stein faces less-than-honorable discharge over comments he made, on Facebook, about President Obama. One of those quotes that’s fairly representative had Stein saying “As an active duty Marine, I say screw Obama and I will not follow any orders from him.”

In an interview with CNN’s Soledad O’Brien yesterday, Sgt. Stein acknowledged that his “words were somewhat tasteless,” he pointed out, in his own defense, that the comments were made on what he called a “closed forum,” and that “they were up for five minutes,” and “only three people saw them.”

Apparently, Stein’s excuses weren’t enough for Erickson. While he also made sure to take shots at anti-Bush liberals who “would have treated him as a celebrity” had his comments been directed at George W. Bush, his condemnation of Sgt. Stein was unequivocal. Here’s a taste:

Gary Stein and many of our enlisted may not like their Commander-in-Chief, but he is still their Commander-in-Chief duly elected by 51% of the voting American public. What these soldiers, sailors, and Marines do on their own time, out of uniform, and not in service is a-okay with me. They don’t completely surrender their first amendment rights.

Stein has gone beyond that though and does not seem to think he has any obligation, while in uniform, to show proper respect to his commander. On his Facebook page, he allowed Obama = Hitler comparisons. In his writings, he thinks soldiers should pick and choose which orders to comply with.

Elsewhere in Erickson’s post, he points out that Sgt. Stein took his case to the readers of Redstate, and had his ass handed to him in the comments section:

Neil Stevens: Sounds like they have you dead to rights. Hope you have a lawyer.

streiff: Gotta say that were I your company commander I’d smoke you like a cheap cigar.

I say that as a RedState frontpager and a former airborne infantry officer.

Scope: Sounds like you drank the Ron Paul Kool Aid and probably are one of the gazillions that have donated to his cause, excuse me campaign. Lay down with dogs, get up with fleas.

Wubbies World: As a retired Senior NCO, I would…pull you into my office and explain the difference between public displays towards commanding officers and private opinions.

You have crossed a line and political considerations as a basis of your ability to follow orders are way out of line. You did this to yourself unnecessarily.

To echo Neil, I do hope you have a good lawyer.

PS: You need grammar and spelling lessons to boot.

A panel of three Marine administrators recommended, last Thursday, that Stein be discharged “other-than-honorably,” which would mean a demotion and forfeiture of his military benefits. Stein’s attorneys are seeking a federal restraining order to stop the discharge.