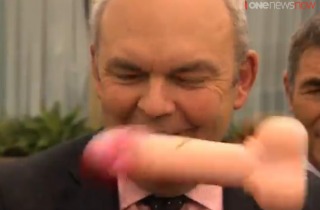 New Zealand government members gathered for a conference to sign the Trans-Pacific Partnership Agreement today, and as the Economic Development Minister, it was hardly a surprise that Joyce would attend and later address the media. As he explained how the meeting went, he was cut short when something huge, pink, and penis-shaped hit him square in the mug.

While Joyce finished the conference without mentioning his rubbery surprise, he later told TVNZ that he was alright and that he managed to cheerfully shrug it off.

“Fair to say I don’t think those sorts of things happen everyday,” Joyce said. “We actually thought it was a little bit humorous at the end of it all. New experiences in politics every day, it’s the privilege of serving.”

Watch above, via RT.