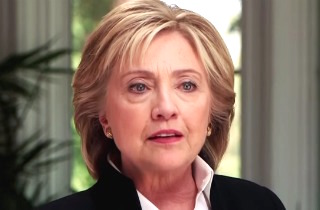 Only yesterday I wrote that Hillary Clinton‘s new excuse for why she took huge donations from Wall Street donations was the lamest to date. Apparently, I should have waited a few hours.

First, it was, “Don’t criticize my Wall Street cash because 9/11 happened.” The yesterday, it became “I took millions in speaking fees from Wall Street because I didn’t realize I was going to have to run for president.” But as of last night’s Democratic debate, Hillary Clinton’s new line seems to seriously be, “You shouldn’t care about my Wall Street donations… just because.”

Time and time again, by innuendo, by insinuation, there is this attack that he is putting forth, which really comes down to — you know, anybody who ever took donations or speaking fees from any interest group has to be bought.

And I just absolutely reject that, Senator. And I really don’t think these kinds of attacks by insinuation are worthy of you. And enough is enough. If you’ve got something to say, say it directly.

But you will not find that I ever changed a view or a vote because of any donation that I ever received.

And I have stood up and I have represented my constituents to the best of my abilities, and I’m very proud of that. So I think it’s time to end the very artful smear that you and your campaign have been carrying out…

So in other words, Hillary Clinton’s Wall Street donations aren’t problematic because Hillary Clinton says there’s nothing fishy going on. Well, that settles it.

I will agree with Clinton on one point: Bernie Sanders needs to stop dancing around every criticism of her he makes. To constantly talk about politicians in the pocket of Wall Street but claim he isn’t talking about Clinton, to keep saying that people ask him everyday to condemn Clinton’s emails but he won’t, it’s an obvious attempt to level attacks without leveling attacks. It’s a very, dare I say, Trump-like tactic.

Democratic presidential candidate Hillary Clinton said late Saturday that most Republicans are skeptical of climate change because billionaire donors David and Charles Koch tell them to be.

“Most of them are not that ill-informed,” she said during a campaign rally in Cedar Rapids, Iowa. “They just have to do what the Koch brothers tell them. They say, ‘don’t believe your lying eyes — listen to us.’”

But when Sanders points out the numerous Wall Street entities and millionaires who are giving money to Clinton’s campaign, it’s wrong to insinuate that there’s any sort of conflict of interest. Why, it’s not just wrong, it’s an “artful smear,” it’s downright offensive. This despite the fact that Sanders is essentially parroting a talking point Clinton herself used only a week ago.

That wasn’t an isolated statement by Clinton; she’s been speaking out against money in politics for years. But with her “artful smear” statement in the debate, she torpedoed the very justification for campaign finance reform. If a presidential candidate can take millions of dollars in donations from the financial giants of Wall Street and we shouldn’t be worried about corruption or influence-peddling, when is big money in politics ever a problem then? Why are other candidates the only ones whose big money donors are suspect?

Oh, and by the way, the day after Clinton’s attack on the Koch brothers, financial records were released showing that billionaire George Soros had donated an additional $6 million to Clinton’s Super PAC. No biggie, though.

It’d be easy enough to cast this as a Clinton problem alone, but with the exception of oddities like Sanders, nearly all Democrats take huge donations from the wealthy and powerful while denouncing their Republican opponents for taking donations from the wealthy and powerful. In the 2014 midterms for example, the two biggest individual donors were liberal billionaires Tom Steyer and Michael Bloomberg. Their combined $102 million in spending was $40 million more than the rest of the top ten donors combined… including the much-maligned David Koch.

Somewhat hypocritically, 2014 also was the year Democrats ran heavily against the Koch brothers, with near-daily denunciations from the Senate floor by Harry Reid. It didn’t end well.

Say what you will about Republicans’ relationship with big donors, at least they’re pretty open about their pro-business, anti-regulation platform and their stance on campaign finance. Not doubt Mitt Romney lost votes when he defended Citizens United and told voters that “corporations are people,” but he didn’t deceive voters about it. And he never deigned to tell voters that big money was a problem, but he alone was immune.

Not so for Clinton. Time will tell if Democratic primary voters swallow her new doctrine of infallibility, but if so, they’ve ceded the moral high ground on the issue.