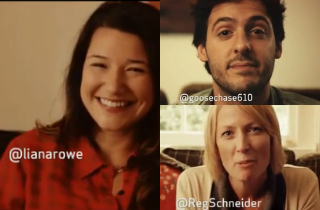 The thrust of the ad is to present customers Liana Rowe, Mike “The Goose” Steinmetz, and Regina Schneider as normal human beings — not just paid shills — who genuinely love their FiOS product so much that they are willing to answer any tweet-questions you have about the fiber-optic service. “Send a tweet to a real FiOS customer, and they’ll tell you just how amazing FiOS really is,” Burrell’s narration implores as the three customers’ twitter handles appear on-screen. Ad below:

Each of the three Twitter handles come with a link to a disclaimer: “This Twitter user is a real FiOS customer incentivized by Verizon to share his/her own opinions and thoughts on FiOS service. The thoughts and opinions expressed by participants in this program are completely independent of Verizon.”

Many of the questions for these “Twitter advocates” are in earnest — “Why should I go with Verizon?” etc. — but many others are just hilariously non-sequitur questions, clearly intending to mess with people who, for obvious contractual reasons, cannot break character and react poorly.

Hundreds of people tweet at the three asking them if they are Verizon robots and whether they are actual non-corporate civilians. But it seems most of the predictable harassment comes in the form of “HOW MUCH ARE THEY PAYING YOU?”

…Which are swiftly brushed off with a contractually-obligated non-comment and a retail-clerk-like chipper attitude: 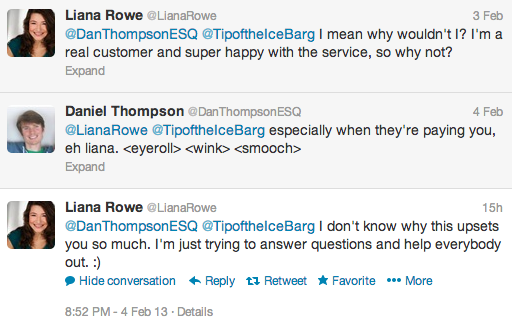 But then there’s the obvious trolling. And plenty of it. Because of her sweet and happy online demeanor, Rowe seems to be the target of sarcastic questions aimed at messing around with her. To wit: 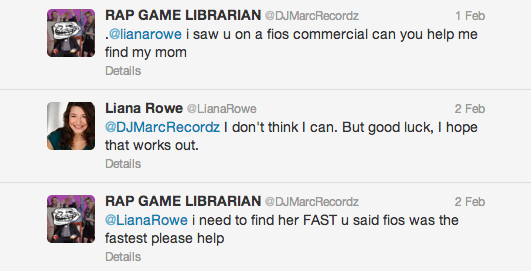 Also, there’s this guy who complies with the commercial and actually asks the tweeters about Verizon FiOS service — namely whether he can get “high-quality adult programming“:

The porn-based jokey harassment seems to be a meme: 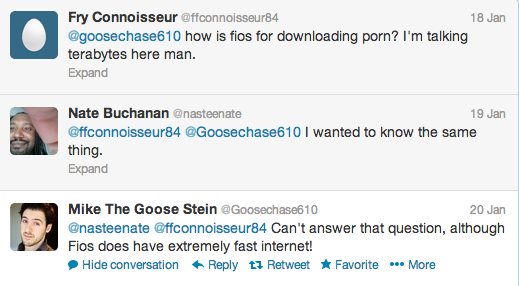 To be fair, it’s understandable why Twitter users would immediately jump on the three “Twitter advocates.” A little background research unearths that they are all working actors: Rowe is an NYC-based theater actress; Steinmetz is a member of the NY-based Pipeline Theatre Company and has appeared in films like 2012’s Not Fade Away; and Schneider is a Long Island-based actress. So yes, there is likely more to this than simply loving a product so much you want to rep them on your personal Twitter account.

That being said, I’ve got to say: Verizon FiOS does have pretty good service (compared to the unreliable provider we have here in Manhattan). And no, I’m not getting “incentivized” to say that.