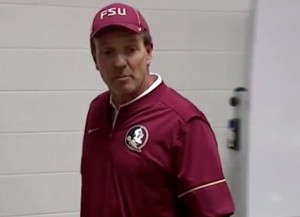 And well…let’s just say it wasn’t exactly the Al Pacino speech from Any Given Sunday.

Check out the video below, via ESPN, as Fisher rambled on in a hoarse voice for two minutes (it seemed much longer in real time) about chopping various things, and “get(ting) after that ass.”

Rewound it and transcribed Jimbo Fisher:

The year is 2018 and Jimbo Fisher has just finished his pregame speech for the 2016 Ole Miss game in Orlando.

Didn’t think it was possible to demotivate a team in a pregame speech. Then Jimbo Fisher rambled for 5 minutes. #FSUvsOleMiss

Jimbo Fisher with the worst pregame speech of all time.

Jimbo Fisher’s locker room speech is made even more incredible by the fact that all his sentence fragments require notes to remember.

“Well, we’re 3:05 into this game and Jimbo Fisher is still delivering his pregame speech….”

Though it was widely belittled, the speech worked. Florida State won 45-34.