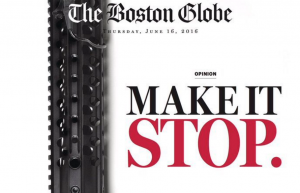 The media and political exploitation we’ve witnessed as a country over the past five is one word:

It’s a shake-your-head moment in looking at the definitive narrative to emerge out of Orlando this week. We’re a blame-ourselves culture regardless of who or what is actually responsible for horrific things, with Republicans usually the first to get a finger (index and/or middle) directed its way after every mass shooting that occurs all too often in this country.

Members of a Charleston black church are massacred by a lunatic? It’s a Republican problem because a Confederate flag was on his property. A Planned Parenthood facility in Colorado is attacked and three people — including a police officer — are killed? It’s Carly Fiorina’s fault. 49 innocents are slaughtered at an Orlando nightclub? The New York Times blames… the GOP.

Disclosure: As noted in my column yesterday, I just don’t see the recreational use-case for an AR-15-type assault rifle (Note: The shooter used a Sig Sauer MCX, which is similar to the AR-15). It is the kind of weapon that should only be used by military professionals and should not be in the hands of average people with no training nor any practical use for something that powerful, that deadly. Ban ’em tomorrow… you’ll see no issue with it in this space.

But here’s where the disgusting part comes in: Instead of most of the media asking hard questions around our progress against ISIS — the terror group the Orlando terrorist pledged his allegiance to several times during the attack — or… if there are any plans to greatly expand and better equip a clearly overwhelmed FBI and local law enforcement… we’re instead solely focusing on the weapon that was used in the Orlando attack and why it should be banned.

The Boston Globe has a front-page editorial today that reads MAKE IT STOP with a photo of an AR-15 below it. Said editorial was obviously prompted by the terror attack in Orlando. Passions are high. People want action. And while a ban on this weapon is action, it only deserves a seat at the narrative table, not every chair around it. But the toothpaste is out of the tube at this point, the bell can’t be unrung. Gun control will be the overwhelming focus here for the next few weeks, because it allows an increasingly-activist media a chance to feel morally superior, makes Republicans look heartless in the process, and gives President Obama (and by extension) Hillary Clinton a free pass when it comes to having to answer for a lack of leadership on, you know, the motivation behind the Orlando attack in the form of ISIS that exploded under their watch.

Ask yourself this: How many times since Sunday has president been asked about using this attack as an impetus to finally building a better coalition with our Arab partners to defeat ISIS overseas? How about the number of times on if he’s going to modify our military strategy since the current one appears to not be very effective? How about why he can’t be bothered to call the Republican governor of Florida after such a horrific event?

And when James Comey — FBI Director — says finding those who could be plotting attacks like these is like looking for needles in a haystack (translation: my Bureau needs more men and women and resources… much more), is Mr. Obama or Mrs. Clinton or Donald Trump being asked about their plans around that aspect? Aren’t those factors equally important in finding this thing called a comprehensive solution?

The answers are all under the “no”, “nope” and “of course not” category. Why? As media becomes more about activism, myopia takes over. Mrs. Clinton made this about gun control from Sunday on, and as a result, those without microphones and bylines are going to pound the gun narrative into the ground regardless of whether the Orlando terrorist used an AR-15 or not. The perception has already become reality. You can ask ten people on the street right now if gun violence has increased to the point of being out of control in this country, and they’ll say yes… except it’s been quite the opposite.

And that’s disgusting that we’re at a point where the ends justifies the means… facts of the story be damned. The kind of hard data just presented — easy enough to obtain for any journalist or citizen — is not being reported this week. At all. And especially in that buzzy Boston Globe’s editorial today…

Orlando is about much more than just gun measures… these are several ingredients involved, but only one seems to be getting all the attention.

People die at the hands of a radical Muslim terrorist acting in the name of ISIS?