Happy Donniversary, America! Here’s What I Wrote About Donald Trump One Year Ago
Opinion

Happy Donniversary, America! Here’s What I Wrote About Donald Trump One Year Ago 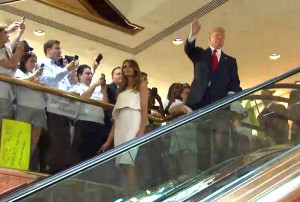 Today marks an important day in American history, and especially for the American political news media, because it was exactly one year ago that Donald Trump descended the escalator at Trump Tower and delivered his Mexican Rapist speech, kicking off a historic frenzy that now has him locked in battle for the highest office in the land. Over the course of that year, the media has repeatedly expressed shock at Trump’s uninterrupted rise, and lamented the fact that no one saw this coming. Well, almost no one.

Just hours after Trump finished his speech, here’s what I wrote:

Trump’s entry into the race has been greeted with glee by liberals, but the real winners here are political reporters, who will now get to shop every crazy thing he says to the other 19 candidates, who all have about a three day window before Trumpmentum forces them to hedge their answers, at best.

Everyone is going to underestimate Trump’s influence, but he was an early and significant frontrunner in 2012, leading eventual nominee Mitt Romney by double digits at one point. With a more crowded, tightly-bunched field this time, Trump’s standout racist performance could quickly set him apart, and atop the GOP field. It only takes a chunk of undecideds to do the trick, and no other candidate has distinguished himself yet to the nativists.

By next week, Donald Trump will be polling at 33%, and the rest of the Republicans will be bidding up how many volts they want to send through their new border fence. And that’s before the debates.

The only thing I got wrong was the fact that, aside from Ted Cruz to a very small degree, none of the other Republican candidates tried to one-up Trump’s overtly racist appeal, instead opting to generally agree with him while mildly criticizing his “tone.” To be fair, it’s hard to top “Mexicans are rapists,” but none of them even tried.

I don’t point this out to brag (well, not just to brag) that I told you so, but to shine a ray of hope, because here’s what I wrote about a month later:

Liberals and Democrats, meanwhile, are laughing all the way to the Whole Foods at the prospect of a Trump general election candidacy, but if you accept the possibility of a Trump nomination, then you dismiss his general election chances at your peril. Assuming thatHillary Clinton is the nominee (which she will be), Trump will head into the general election with the same attack-dog skills and media attention that he had in the primaries, but with the additional benefit of a clean slate on the issues. While the Clinton-hating media continues to attack Hillary with stories that don’t actually add up, don’t be surprised to see Trump outflank Hillary by, say, proposing instant citizenship to go along with his Mexican-proof fence. Once he’s got the GOP nod, The Donald can freestyle on the issues like it’s 8 Mile Road up in here.

While Trump is busy collecting Republican voters, who will turn out no matter what in order to defeat Hillary Clinton, Hillary will be turning out the Obama coalition that helped President Obama win twice, but might not be turning out the bitterly defeated Sanders/Warren wing. Then, your election will be decided by the handful of soft-headed “independents” who always decide things, and who are relentlessly being told that they can’t trust Hillary Clinton. Before you know it, there’s a CBO report on just how much it will cost to gold-plate the White House.

It’s still an open question whether Hillary can turn out the Sanders wing, but Trump shows no signs of taking advantage of the opportunity to Etch-a-Sketch his lunatic policy ideas or overt racism, even though the media is more than willing to let him. That could change once he’s actually nominated at the convention, and the Republicans really can’t do anything about it. The media has been asking the wrong question all along, wondering what will be the thing that brings Trump down instead of asking how deeply the white resentment and fear that fuels his appeal actually runs in this country. That question should largely be answered by the end of this week, when we see just how far Trump’s post-Orlando rants can take him in the polls.