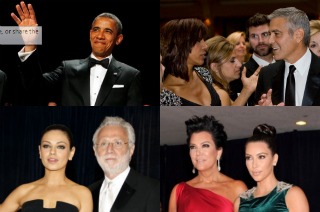 “The breaking point for me was Lindsay Lohan,” Tom Brokaw recently said. While this statement could apply to so many circumstances, he was specifically referring to the annual gala event known as the White House Correspondents’ Dinner. “[W]hat we’re doing with that dinner, as it has been constituted for the past several years, is saying, ‘We’re Versailles. The rest of you eat cake,’” Brokaw added in a striking rebuke of what the night (which has evolved into a whole weekend of festivities) has become. There will come a day soon when members of the press will ask themselves why they did not listen to Brokaw. The political media has a credibility problem, and the WHCD is not helping.

First, let’s get this out of the way; the WHCD serves a number of good purposes. First, it allows people toiling away in absurdly stressful professions to blow off some steam. Also, the dinner’s sponsor, the White House Correspondents’ Association, is a non-profit which raises money for charity and funds scholarships for needy kids. For these reasons, the event, lamentably referred to as “nerd prom,” is an important institution.

But the public does not see these things. What they see is the red carpet, the klieg lights, the rapid-flash photography, the step and repeats; they see the press playing Hollywood in an atmosphere designed to present them as celebrity facsimiles. Americans do not trust celebrities.

The media’s credibility is in free fall. The reliable headline emerging from Gallup’s annual survey of Americans designed to measure their trust in the media is that mistrust of the Fourth Estate has reached a “record high” — three times in as many years, in fact. 60 percent of all adults in 2012 said they do not trust the media. Only 8 percent of respondents said they have a “great deal” of trust in the news media. This is a crisis by any standard. The public no longer trusts the product that is being produced.

Avid consumers of news, particularly political news, now believe they have to consume journalism as a Kremlinologist of another era would parse the statements of Soviet bureaucrats in order to divine their true meaning. What is important is what is not said, the phrasing of sensitive topics, or how descriptive adjectives are employed which determine who has fallen out of favor within that close-knit institution. The USSR may be gone, but Kremlinology lives. Indeed, regular news readers pride themselves on their ability to decode the political press. Journalists deride this instinct as paranoia, and they may have a point. But they ignore the feedback of their customers at their peril.

It is in this environment that the pretentious artificiality of the WHCD takes place. This month, E! Entertainment network announced that they would livestream the red carpet at the WHCD on Saturday night for the first time. The nexus of celebrity, journalist, and politician is finally complete. The home of Keeping Up With The Kardashians finally finds the WCHD to be worthy of coverage. A dubious honor, to say the least.

Few institutions trade on their credibility like the political media does. Some would cheer the surrender of their credibility in order to achieve some measure of celebrity, but they are not joined by Mr. Brokaw. He warned his colleagues in 2012 that the WHCD had lost its way, and served now as a barrier between the journalists who cover the politicians in Washington and the average voters residing well outside the Beltway whom they are supposed to serve.

“If there’s ever an event that separates the press from the people it’s supposed to serve, symbolically, it’s that one. It is time to rethink it… I don’t think the big press event in Washington should be that kind of glittering event where the whole talk is about Cristal champagne…, who had the best party, who got to meet the most people,” Brokaw said on Meet the Press in May of last year. “That’s another separation between what we’re supposed to be doing and what the people expect us to be doing, and I think the Washington press corps has to look at that.”

He’s not waiting for his fellow journalists to get the message. Mr. Brokaw has said “no thanks” to the White House Correspondents’ Dinner.