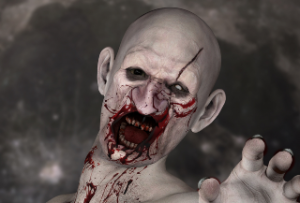 Given its ability to shatter ratings records, even up against the major networks, it’s clear AMC’s The Walking Dead is an incredibly popular cultural phenomenon. (Let’s face it, the day they kill Darryl is the day fans riot in the streets.) Well, as awesome as zombies are, apparently they are a menace to society and our mindless, brain-dead absorption of this cultural phenomenon is actually a threat to the existence of our nation.

Fox News columnist Dr. Manny Alvarez wrote a piece today for FoxNews.com that says what we’ve all been thinking: innocuous pieces of pop culture are a slippery slope to a new world order.

And, somehow, that’s not an exaggeration.

Hate me all you want, or call me paranoid and misinformed, but there is one common theme that is pervasive in American pop culture today: violence. Even more specifically, zombie violence. The idea of a zombie-infested world inspires fantasies of monsters possessed by an uncontrollable rage to kill, and viewers get a thrill imagining what it would be like to participate in this new world order.

Exactly. Everyone watching The Walking Dead thinks, “Yeah, they live in constant fear for their lives, resources are scarce, and people have lost their freaking limbs, but man, wouldn’t it be totally awesome for that to happen?!”

Alvarez goes off on the same old trope about how violence in popular culture triggers real-world violence, before admitting he’s positively puzzled at this strange zombie obsession permeating its way through American culture, even touting his medical chops to say a zombie outbreak is never going to happen.

He also bizarrely says that “entertainment should help us soothe our brains so that we can ease our minds of some of the stress from our daily lives,” in the same paragraph where he condemns the practice of indulging in zombie-based entertainment to help us take our minds off our own stress. Bob getting credit for your great idea at work doesn’t seem so bad compared to zombies falling out of the goddamn sky, does it?

But here’s where the column really takes a turn; namely, an unexpectedly political one.

With this country heading towards a socialized system of government, in which officials don’t want you to think or focus on what is important for your own personal growth, I’m sure they’re more than happy to let you obsess over something as stupid as zombies.

Aha! So the American people are the zombies and Barack Obama is The Governor! Or something.

But Alvarez inadvertently gave away the game there when he calls zombies “stupid.” Because, really, he can’t honestly think this is a legitimate danger to American society. He just found an excuse to write an entire column on Fox News’ website about why he thinks zombies suck so hard and why we’d all be better off just watching Leave It To Beaver reruns.