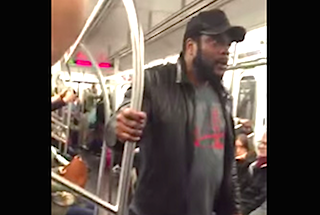 Chad Coleman, the actor who was best known for playing “Cutty” on The Wire before he became Tyreese Williams on The Walking Dead, appears to have had a serious meltdown on the NYC subway this weekend. And of course, the entire thing was caught on cell phone camera.

“Yes, I’m Chad L. Coleman,” the actor can be seen screaming in the video as he paces up and down the train car. “I’m on The Wire, The Walking Dead. I’m not trying to fuckin’ play no games with you. I’m telling you the truth. Yes, I’m an actor.”

Coleman then started shouting about “humanitarians” and said, “If you care, fuckin’ care! And that’s the goddamn truth,” daring people to take video of him.

Whatever set Coleman off is not in the video recording, but TMZ was able to reach him and provided this by way of an explanation:

We spoke with Coleman, who told us he heard a guy and a girl on the train talking, trying to figure out where they knew him. He says the guy told the girl, “No, we don’t know that n*****,” and that set him off.

As for the screams about humanity, he says he was referencing the problems in Baltimore.

He says he was sober on the train.

If Coleman wanted to speak out publicly about the situation in Baltimore, he could have just gone on MSNBC like the rest of his cast mates from The Wire.
Watch video below, via YouTube: