This Exists: 72-Year Old Florida Man Fights Off Alligator To Save His Dog 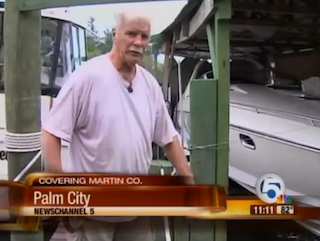 Well, here’s a news report that blew my mind. Sure, I’ve never lived in an area where giant, terrifying lizard monsters are calmly referred to as “nuisance alligators” by reporters so I don’t know if this kind of thing is common day to the citizens of Palm City, Florida. But, for a northern boy like me, 72-year-old Gary Murphy, a man who fought off an alligator that was trying to eat his dog, sounds like the biggest bad ass ever.

It all took place right out behind Murphy’s house when he noticed something was up with his little Westie, Doogie. WPTV has the story:

“‘I’m right here, standing right here and I hear a yipe,’ says Murphy, standing behind his home which sits in a marsh along the St. Lucie River. ‘I look down. The gator’s right here with Doogie in his mouth.’

Murphy didn’t hesitate, after all Doogie is more than a dog, he’s a constant companion.

‘I must have cleared this by a foot,’ says Murphy, referring to the rope railing that runs along the dock. ‘I had loafers on and I hit the back of that gator. It was like jumping on a pile of rocks. But when I did, I caught him right behind the head here, I hit him here and his mouth opened and Doogie took off and the gator turned around and went under the boat and out he went.'”

And how’s little Doogie? Fortunately, despite some nasty bite marks, the dog didn’t suffer any serious injuries and should be ok.

As for Murphy, is he planning on moving away from an area in which scenes from his every day life seem akin to something out of a horrifying monster movie? No. But he did tell reporters that he’d be “ready” if the gator came back and that he’s thinking about putting in an electric fence.

Clearly they’re cut from a different cloth down there.

Check out the video report from WPTV below: