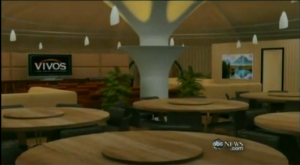 Disclaimer: I’ve lived the majority of my life in the post-Cold War world and, consequently, find it difficult to see the inanities of that era’s fear-mongering marketing ploys as anything but silly. That said, this is hilarious: USA Today is reporting that Cold War era paranoia is alive and well in today’s society (albeit modified to accommodate the more ambiguous range of threats we face today) in the form of a booming underground bunker industry. But these aren’t your average hole-in-the-desert bunkers, mind you. These are bona fide luxury comfort subterranean shelters. No joke!

Meet the Vivos network, “a nationwide group of 20 fortified, underground shelters” that you can buy into for the small price of $50,000 per person ($25,000 for each of the kids). According to USA Today, the network offers “partial ownership similar to a timeshare” in luxury styled underground bunkers (artistic rendering above). Amenities include a hospital, dental clinic, move theater, and (judging from schematics available on their website) a bank of desktop computers. Great, I’m glad to know I can check Facebook while I’m waiting out the apocalypse.

Okay, a couple things here: 1) If it’s the end of days, wouldn’t you want a full time gig, not a timeshare? I mean, it would be a bit depressing to realize that, “Oh darn, the Joneses have the bunker for the weekend, guess we’ll have to weather out this nuclear blast in the basement.” 2) Average college tuition in the U.S. at a private four-year school is $35,000 a year. Just saying.

Below, check out an appropriately dramatic ABC segment about Vivos from two weeks ago. The video is featured prominently on the network’s homepage. Also worth checking out on the site is the Mayan-inspired 2012 countdown clock (which you can download) and the helpful threat scenario videos. My personal favorite: the Jesse Ventura-narrated government conspiracy video.