This (Doesn’t) Exist: Women Tattoos Pictures Of 152 Facebook Friends Up Her Arm (UPDATE) 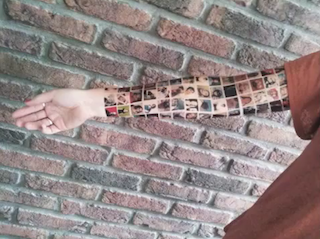 A viral video on YouTube right now is getting some pretty harsh comments. For instance, the highest rated one simply says, “you are a f**king retarded? person” (minus the asterisks). What kind of video could inspire such hatred? Well, really most of them. I mean, have you read YouTube comments? But still, this video is especially provocative. It was uploaded by a woman in the Netherlands and shows the process she underwent to have the profile pictures of 152 of her Facebook friends uploaded on her arm. (Or not. Update below.)

So…uh…why? Well, here’s what she has to say in the video’s description:

“Finishing my social tattoo with 152 pictures of my Facebook Friends!
Of course I gave it a lot of thought. These are not all my friends. Just the people I care most about. I got their permission and they were very proud to be on it. To me it represents who I am right now and the time we live in. And of course I love the looks of it.
The Tattoo is designed by Pretty Social and the tattoo artist is Tattoo Dex.”

Obviously there are a number of questions here that everyone is asking (or screaming if you judge by all the caps lock use in those comments). What if she drifts away from some of those friends? What if one of them decided he doesn’t like that picture? What if MySpace makes a comeback?

Still, despite all the hate being lobbed at the woman, known only by her YouTube user name susyj87, I’m sure that her actions are seen as beautiful in certain circles and that this will make her very popular indeed.

UPDATE: This is one of those few times where I’m glad to have to type up a correction. It turns out the whole thing was a hoax.

The tattoo artist in the video admitted everything to a Dutch newspaper:

‘It is a try out tattoo, a transfer, that washes off in a couple of days,’ Moelker, who has a tattoo shop in Rotterdam, told the paper. It took a couple of hours to apply the transfer not the 30 hours the video claimed to produce the real tattoo.”

Check out a video report from MSNBC with some amusingly bemused reporting from Willie Geist below: