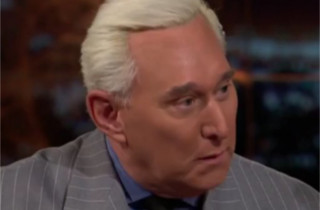 The url in Stone’s tweet links to a website run by anti-Islam pundit Walid Shoebat, and co-run by his son Theodore Shoebat. The Shoebats argue that “Khan is a Muslim plant working with the Hillary Clinton campaign, probably for the interest of Muslim oil companies as well as Muslim immigration into the U.S.”

It’d be kind to say their evidence is circumstantial at best. Among the leaps in logic, “Khan wrote the paper in the eighties while he was in Saudi Arabia, the motherland of Wahhabism, which means that Khan clearly had a Wahabist connection.” Or, “According to a recent report, Khan moved from Pakistan to the United Arab Emirates, a hotbed for the Muslim Brotherhood.”

The site even attacks Captain Humayan Khan, the decorated soldier who died serving in Iraq. “In regards to his son, many were the ‘Muslim martyrs’ who joined the US military…” they argue. “Is it likely that Khan’s son was killed before his Islamist mission was accomplished? Only another type of investigation will determine that.”