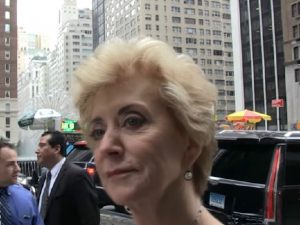 It was announced today that President-elect Donald Trump had made another choice to fill out his administration — World Wrestling Entertainment co-founder Linda McMahon.

McMahon, who launched a failed Senate bid in 2010, has been nominated to be the Administrator of the Small Business Administration.

In the announcement by Trump’s team, McMahon’s experience growing the WWE from a 13-person organization to a publicly traded company with more than 800 employees was one of the key reasons behind the choice.

“Linda has a tremendous background and is widely recognized as one of the country’s top female executives advising businesses around the globe,” per Trump’s statement.

Of course, Trump and McMahon go way back due to Trump’s on-screen involvement with the wrestling operation. Trump is a WWE Hall of Famer and took part in Wrestlemania 23.

As one would expect, a number of people referenced this on Twitter.

Wow, @Linda_McMahon accepted @realDonaldTrump's nomination to head the SBA even after he beat the crap out of her husband pic.twitter.com/6uCW2A7iTp

i bet when naming linda mcmahon to the small business association, trump really

wrestled with his choice