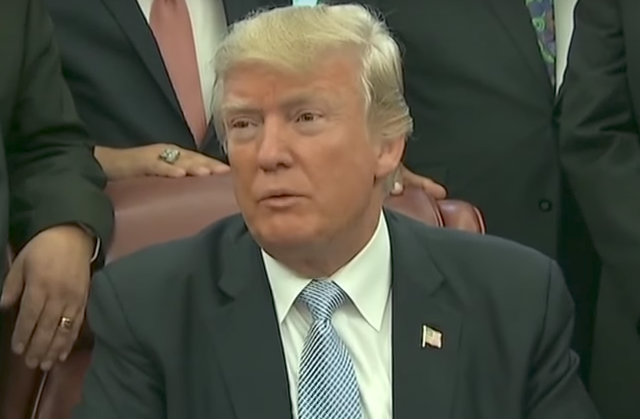 Earlier this week, it was reported that the Trump administration had decided to lift an Obama-era ban on importing elephant hunting trophies from Africa. After facing intense public outcry from all across the political spectrum, however, the president took to Twitter to announce that he had reversed course and was placing the “big game trophy decision on hold until such time as I review all conservation facts.”

Put big game trophy decision on hold until such time as I review all conservation facts. Under study for years. Will update soon with Secretary Zinke. Thank you!

Following this tweet, many took to Twitter to thank the president for keeping the ban in place. Two of them who offered up praise — Greta Van Susteren and Piers Morgan — were retweeted by the president.

Thank you @realDonaldTrump – this is important to so many of us https://t.co/zJAfZByQKX

Meanwhile, other Blue Check Twitter folks tossed out reactions that ranged from thanking Trump for doing the right thing to highlighting that it was the public pressure that forced POTUS to maintain the ban.

The best decision from Trump after making his worst decision Trump reverses elephant trophy decision post public outcry https://t.co/El6S2Qjrjf via @MailOnline Was it right in the first place to repeal a law based around the ugly habits of his ignorant compassionless sons?

You did it.
Our voices have been heard! Keep howling. https://t.co/POK0yoLcNU

Trump is delaying this for now. Keep the pressure on. https://t.co/791l2XIO4s

I for one am thrilled that Trump caved on removing the ban on African Elephant trophies. Anyone who wants a trophy for killing one of these animals is a soulless monster. pic.twitter.com/ESsWEplohp

After a massive public uproar, Trump folds and decides to keep the Obama-era ban on importing elephant trophies…at least for now. https://t.co/SF0bu1z8BA