Trump Tells Crowd to ‘Knock the Crap Out’ of Protesters, Offers to Pay Legal Fees
video

Trump Tells Crowd to ‘Knock the Crap Out’ of Protesters, Offers to Pay Legal Fees 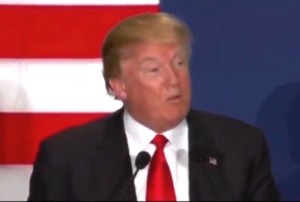 At a rally Monday afternoon in Cedar Rapids, Iowa, Donald Trump told a crowd of supporters that if they happened to see protesters getting ready to lob a tomato, they should “knock the crap out of them.” Trump began his speech by noting that he had received a warning from the “wonderful security guys.” He said:

There may be somebody with tomatoes in the audience. So if you see somebody getting ready to throw a tomato, knock the crap out of them, would you? Seriously. Okay? Just knock the hell—  I promise you, I will pay for the legal fees. I promise, I promise. It won’t be so much ’cause the courts agree with us too.

Last week, at another Iowa rally, a heckler chucked a few tomatoes at Trump, and was arrested for disorderly conduct.

For his part, Trump has a somewhat dubious record on how he has handled protesters at his rallies. He defended some of his fans for punching and kicking a #BlackLivesMatter protestor, saying “Maybe he should have been roughed up.”

He also told security to eject a protester at an event in Burlington four weeks ago, and to confiscate the heckler’s coat, sending him into the Vermont winter without protection. “You know it’s about ten degrees below zero outside,” he enthused at the time.