Trump To Laura Ingraham: Obama Will Go To War With Iran To Help Popularity
audio

Trump To Laura Ingraham: Obama Will Go To War With Iran To Help Popularity 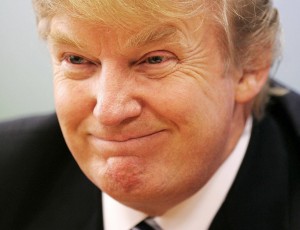 On The Laura Ingraham Show Tuesday, real estate impresario and Mitt Romney supporter Donald Trump alleged he believes President Obama will start a war with Iran because it will help him in the short term politically. “We’re looking at Iran. I happen to think that the President is going to start a war with Iran. I think it will be a short-term popular thing to do, and I think he’s going to do that for political reasons, if you want to know the truth,” Trump told Ingraham.

RELATED: Obama On Iran: ‘If Some Of These Folks Think It’s Time To Launch A War, They Should Say So’

“I don’t know if anyone says this openly, but I think he’s going to start a war with Iran and, that will be short-term popular,” Trump surmised. “If you remember Bush, Bush was unbeatable for about two months, and then all of the sudden the world set in when he attacked Iraq. And he went from very popular to not popular at all. I think that Obama will start in some form a war with Iran, and I think that will make him very popular for a short period of time. That will make him hard to beat also.”

During his press conference last month, President Obama criticized his Republican opponents’ tough talk on Iran, and maintained that his administration was going to continue enforcing sanctions. “My policy is not containment,” Obama explained. “My policy is to prevent them from getting a nuclear weapon.”

“…What is said on the campaign trail, you know, those folks don’t have a lot of responsibilities,” Obama observed. “They are not commander-in-chief and when I see the casualness with which some of these folks talk about war, I’m reminded of the costs involved in war. I’m reminded that the decision that i have to make, in terms of sending our young men and women into battle, and the impact that has on their lives, the impact it has on our national security, the impact it has on our economy. This is not a game, and there is nothing casual about it.

And, you know, when I see some of these folks who have a lot of bluster and a lot of big talk — but when you actually ask them specifically what they would do, it turns out they repeat the things that we’ve been doing over the last three years. It indicates to me that that is more about politics than actually trying to solve a difficult problem. Now, the one thing that we have not done is we haven’t launched a war. If some of these folks think that it’s time to launch a war they should say so, and they should explain to the American people exactly why they would do that and what the consequences would be. Everything else is just talk.”

Listen to Donald Trump’s claim below: