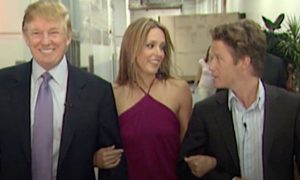 As you’ve heard by now, today’s big Donald Trump revelation was some late-afternoon audio leakage from the Washington Post. The Republican nominee was heard commenting to Billy Bush about his attempts to seduce a married woman. The conversation happened months after he married Melania Trump, his third wife.

Trump has issued an apology for the leaked audio, which includes him revealing that when he sees a beautiful woman, he just kisses her and does not wait. He also claimed that “when you’re a star, they let you do it. You can do anything” and insulted a married woman who wouldn’t sleep with him by making fun of her “phony tits.” Also worth mentioning is his advice to Bush, which included, “Grab them by the pussy.” Again, he insisted, “you can do anything.”

Here is that apology:

Somehow, he dragged Bill Clinton into the mess, which is strange, since Clinton is neither running for President nor someone who was even present during the conversation, which was recorded in 2005.

People have taken note of the buck-passing.

If Trump is telling the truth in his statement, then voters should consider not voting for him or Bill Clinton.

@ZekeJMiller @realDonaldTrump, “locker room banter” isn’t an excuse to treat women as objects. How does @KellyannePolls defend this clown?

So, in summary, Trump apologizes by saying Bill Clinton is worse. Only an imbecile would buy that.

New Donald Trump slogan" Forgive me Father for I have sinned, But actually it was really Bill & Hillary Clinton's fault ". always is! #msnbc

Exactly @BostonJerry: Trump got called out for lewd comments & his response was "Bill Clinton has said worse!" He is less mature than an…

It's Bill Clinton's fault that Donald Trump got caught on tape making lewd and disgusting remarks on women.

It is reminiscent of Fox News Channel’s Jesse Watters‘ apology from the other day. His segment on the political leanings of inhabitants of Manhattan’s Chinatown was widely criticized as racist, so he apologized “if anyone found offense.” Trump’s statement similarly says, “I apologize if anyone was offended.”

The Trump statement is the exact same as the Wikipedia example of a "non-apology apology." pic.twitter.com/w1Oae9pfE2

You know it's bad news when the Trump campaign email subject is just "STATEMENT FROM DONALD J. TRUMP."