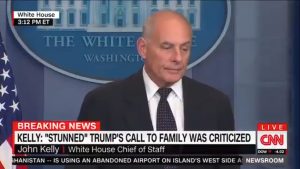 To hopefully top off what has been an uncomfortably politicized issue surrounding honoring fallen soldiers, White House Chief Of Staff John Kelly took to the podium at the White House press briefing today to share his feelings and to defend President Donald Trump’s comments.

Over the course of the briefing, Kelly claimed that he was “stunned” and “broken-hearted” after he learned that Congresswoman Frederica Wilson was listening in while Trump’s called the widow of Sgt. La David Johnson.

“Blue Check Twitter” from all-sides chimed in on this. Reactions ranged all the way from near-contempt for Kelly to glowing praise of Kelly’s emotional briefing.

Kelly isnt just an enabler of Trump. He’s a believer in him. That makes him as odious as the rest. Dont be distracted by the uniform.

Just landed and thanks to spotty wifi, just learning that Trump sent General Kelly out to use his son’s death to defend Trump. Unreal.

General John Kelly is making many of you look very foolhardy right now. I’m sure those apologies will roll out in 3….2…1…

This John Kelly statement is the most gripping spokesman duty I’ve seen all year.

I hope every member of the media who is criticizing @realDonaldTrump for calling to console a Gold Star family is watching John Kelly.

I keep telling y’all about John Kelly. He signed up to make Trump’s craziness look less crazy. That make Kelly himself VERY dangerous…

Getting emotional listening to Gen John Kelly talking about his son who was lost in combat. Kelly is a special man, we need more of him.

Gen. John Kelly is out there cashing in ALLLL of his credibility in service to Trump.

Hope it’s worth it.