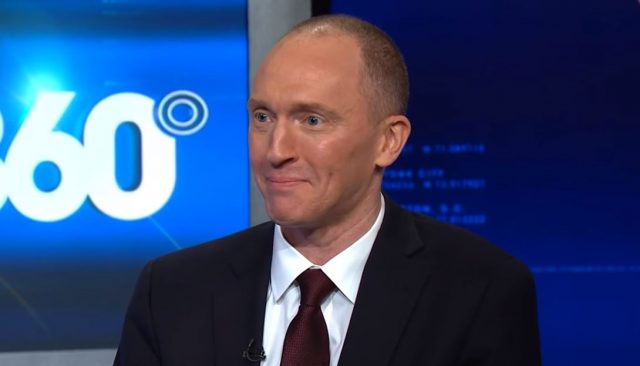 This evening, the House Intelligence Committee released the testimony given in a closed-door hearing by former Trump campaign advisor Carter Page last week. The interview with the committee was related to the ongoing investigation into Russian election meddling and whether or not the Trump campaign colluded with Russian officials.

Prior to the release of the 200+ page transcript, we had already been given reports that Page’s testimony included some juicy tidbits such as revelations that he met with Russian officials during a trip to Moscow and he informed Jeff Sessions about the trip during the campaign. Page also told CNN’s Jake Tapper that he told a “few people” about his Russia trip.

Of course, considering that Page met with the Intel Committee for seven hours, it was a given that we’d get some more details. And did we ever! One thing Page told the lawmakers is he raised the idea of then-candidate Donald Trump visiting Russia during the campaign, likening it to Barack Obama’s Germany trip in 2008.

As folks flipped through the dozens of pages of testimony this evening, we got tons of reaction to what they found in the transcript.

Trey Gowdy asked Carter Page if he ever communicated with Donald Trump via Snapchat pic.twitter.com/uI20kpxx04

Adam Schiff Asking Carter Page Whether He's Invoking The Fifth Amendment Is Something Else. pic.twitter.com/aNchV7MnTG

we are fortunate in this industry to have characters like Carter Page.

thank you, Carter, for being you.

Carter Page's HSPCI testimony is why you shouldn't even sneeze at the state without a lawyer pic.twitter.com/ZGByO5YaT3

Carter Page on why he went to Russia even if it might not be a great idea: “Because I was trying to live my life” https://t.co/MI8M2rtM6R pic.twitter.com/eEF5FEPheW

Carter Page’s House Intel testimony shows Russians paid for his Moscow travel in 2016, when he was a Trump advisor. They know an easy mark.

Q: So, like, why did you go to Moscow, Dr. Page?
A: #YOLO #carterpage pic.twitter.com/oikGwWBSE6

Carter Page is being his own attorney. If only there was some apt legal witticism that accurately captured how foolish that is.

some of these interactions are just bonkers.

Best wishes and condolences to the reporters who are to having to produce stories out of 243 pages of Carter Page word salad tonight. https://t.co/NxXQDf8xPn

a Carter Page has no home https://t.co/4nOIRCr1PE