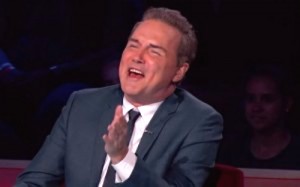 Entertainment Weekly has confirmed that the 2016 Academy Awards will most likely feature two hosts.

This isn’t the first time that the Academy has decided to hand the baton to a duo during the Oscars telecast. Sometimes it works really well, like when Steve Martin and Alec Baldwin took to the stage in 2010. Sometimes not, such as the following year when James Franco and Anne Hathaway gave co-hosting a shot.

EW‘s Anthony Breznican suspects the showrunners have a pair in mind, and even goes as far as to suggest that Key & Peele‘s Keegan-Michael Key and Jordan Peele could be it.

Comedian Norm Macdonald, however, has a different theory, which he shared with his Twitter followers on Wednesday afternoon:

This year the Oscars will have two hosts. My vote is for Bruce and Caitlin.

Needless to say, many of Macdonald’s followers (and otherwise) weren’t pleased with the joke. Many obviously took offense, whereas a surprising number were less thrilled with its mediocrity. Highlights include:

@normmacdonald not your best work.

@normmacdonald not gonna lie, just lost a good amount of respect for you.

@normmacdonald I’m all for a good Caitlin Jenner joke, but joke-wise, you’ve set the bar way higher than this.

@RocketDynamo @normmacdonald It was funny, but it was also also punching down and lacked class.

@normmacdonald be quiet you Nazi Norm. How dare you make fun of Caitlin.

@normmacdonald Uh oh better watch it with that or you’ll find yourself in internet trouble, might even get sent to Twitter jail…

@normmacdonald Caitlyn, Norm. with a Y.