Twitter Reacts to Sarah Sanders Saying Jemele Hill Should be Fired: ‘Sit the Hell Down’ 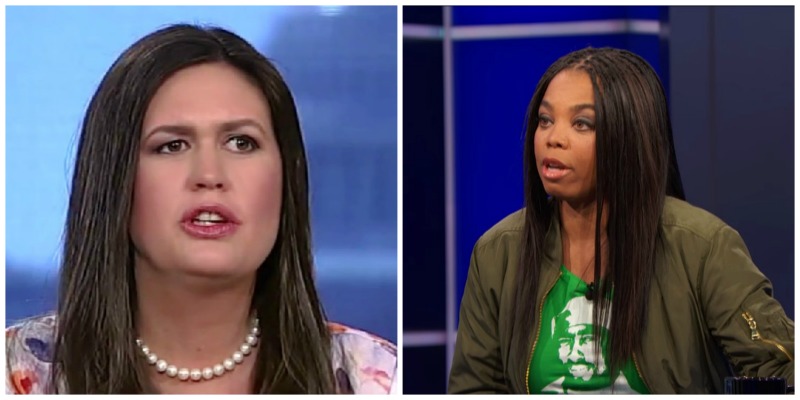 During today’s White House press briefing, White House Press Secretary Sarah Huckabee Sanders weighed in on the latest media controversy. Regarding the whole brouhaha that has developed over ESPN host Jemele Hill tweeting that the President Donald Trump is a “white supremacist” — something Hill has since been reprimanded for — Sanders used the podium to declare that Hill’s comments were a “fireable offense.”

Well, considering that the White House spokesperson called on a private individual to be terminated from her job, it didn’t take long for Twitter to react.

Today, the White House press secretary used the people's podium to call for the firing of an individual citizen, @jemelehill. Take that in.

So AG Jeff Sessions coddles abusive cops; wants to pull back from consent decrees, but y'all mad at @jemelehill? Sit the hell down.

It's hard to overstate how troubling it is for the White House to call for a private citizen to be fired.

W.H. officials have pressured media companies about critics in *private* before. But this time it happened in public https://t.co/BB3mp1nMHF

Well I think it’s Sarah Sanders’s comments about Jemele Hill’s comments that were outrageous & un-American & a fireable offense. So there.

Trump spox says if you call Trump a white supremacist u should be fired. Well I shouldve been fired a year ago: https://t.co/U9xphw3JrK

Other than that, super https://t.co/3UM0IE2QGx

Meanwhile, Politico’s Jack Shafer felt that this was all just a tactic by the White House to distract the media:

"What can we do to get the press to chase its tail?"

"How about have Sanders call for Jemele Hill's firing?"