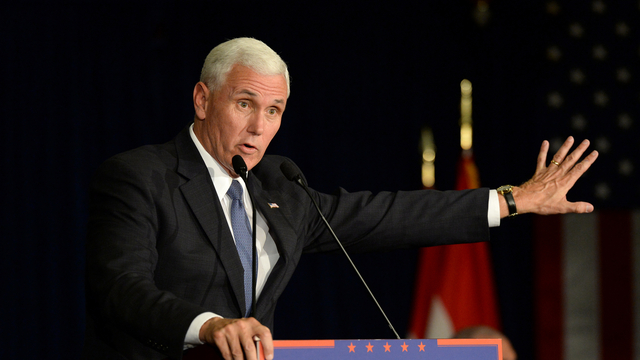 In 2002, Mike Pence told the Hill that he never eats alone with a woman other than his wife and that he won’t attend events featuring alcohol without her by his side, either.

Huh? Not ever? Not with anyone? The Internet has a ton of feelings on the matter and promptly went nuts. Some talked about how the rule affects professional opportunities for women:

Women are (quite literally) not at the table and cannot be in any important roles, whether when he was Indiana Gov, now VP, anywhere.

1/ If Pence won’t eat dinner alone with any woman but his wife, that means he won’t hire women in key spots.

Others, of course, had lots and lots of jokes:

It’s ok, Mike Pence. No one wants to be alone with you either.

does anyone even WANT to be alone with mike pence

I feel a lot better knowing that whenever Mike Pence refuses to dine with a woman alone, Trump is right there to pick up the slack

I also refuse to dine alone with any woman who is not Mike Pence’s wife.

Mike Pence, an adult who is grown,
Cannot sit with women alone.
However, he can
Stand by an old man
Whose fondness for groping is known.

.@mike_pence Woman in elevator was eating chips. Did I just have private lunch with her?? I burned my penis on office kettle to be safe⛪️??

.@mike_pence a married fedex man approached my door but i’m home alone so i called the police was that the right choice

And others, still, took the revelation to mean that Pence doesn’t trust himself around women:

Think of it this way
Your mom asks Mike Pence 2 dinner 2 discuss policy
“OH NO, I can’t eat alone with u”
He thinks he might shag your mom

Raise your hand if you’d be uncomfortable being alone at a meal with Mike Pence, a man who obviously can’t control himself

The fact that Mike Pence openly admits he can’t be alone with a woman who isn’t is wife is NUTS.