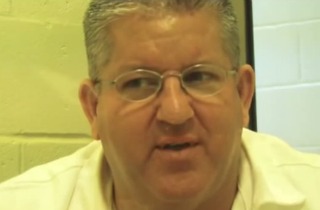 Here’s a prison release deal you don’t see every day: Texas inmate Bernie Tiede will be released from prison on the condition that he live with Richard Linklater, the Hollywood director who did a movie about his life. Linklater directed the 2012 black comedy film Bernie, starring Jack Black, telling the story of how Tiede, a respectable Texas mortician, was convicted for killing the old woman in a moment of passion he was caring for and putting her body in a freezer for nine months before it was discovered.

Tiede was sentenced to life in prison in 1999, but Linklater believed that Tiede got an “extremely harsh sentence,” and he went so far as to testify on Tiede’s behalf this week. Linklater even offered to let Tiede live with him, and that is exactly what will happen.

The judge in Tiede’s case believes that his sentence should be reduced, and so he has been temporarily released on bond with several conditions.

His conditions include that he live in Austin with Linklater, that he seek psychological help to cope with the abuse and that he is not allowed to possess any firearms, among other things. Tiede will remain under the conditions of the bond until the Texas Court of Criminal Appeals, the state’s highest criminal court, approves the reduced sentence.

And Linklater has no hesitations whatsoever about having Tiede live with him, saying “Myself and others are determined to help him in any way we can.”

You can watch a profile of Tiede and his case below, via the Longview News Journal: