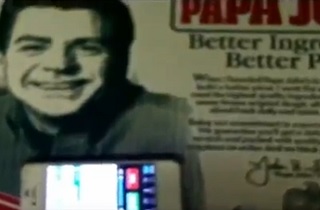 Never let it be said that racists aren’t creative. A pair of Papa John’s Pizza employees in Sanford, Florida have been fired after they inadvertently serenaded a black customer with a highly offensive, if musically eclectic, medley of racial slurs. Unfortunately, the duo’s merrymaking was all caught on tape because the geniuses ass-dialed the customer, and left the entire opus on his voicemail, which the customer then submitted to World Star Hip-Hop for wider distribution. On Monday, Papa John’s CEO John Schnatter apologized for the incident on Facebook.

The voicemail consisted, largely, of song parodies of The Barber of Seville, and Rhythm Heritage‘s Theme From SWAT. Here’s how the affected customer described the incident, on WorldStarHipHop.com:

It’s no surprise these guys were dumb enough to leave this on voicemail, since the driver who trashes the customer for not tipping acknowledges “they gave me five bucks,” which, according to the receipt shown in the video, is almost a 33% tip.

Gaby Dunn of The Daily Dot confirmed the tape’s authenticity, and the firing of the two employees:

The Papa John’s manager, Keith, confirmed the video is real. He said the team members involved have been fired.

“We were made aware of the video and it’s under investigation,” he said. “We’re sorry that it happened.”

On Monday, Papa John’s CEO John Schnatter took to Facebook to apologize for the incident:

Friends, I am extremely concerned to learn about the reprehensible language used by two former employees in one of our restaurants. Their thinking and actions defy both my personal and the company’s values, and everything for which this company stands. The employees responsible for this absolutely unacceptable behavior were immediately terminated.

My heartfelt apology goes out to the customer involved, his family, and our community at large. I am very sorry that anyone would be exposed to these hurtful and painful words by any person involved in any way with our company.

Thank you for your important comments. I have personally reached out to our customer to share my own thoughts and offer my deepest apology.

Schnatter became a somewhat polarizing figure over remarks he made about health care, and his outspoken support of Mitt Romney, but his swift and thorough reaction to this is something most folks should be able to agree on.