Walmart is Listening… to Ashton Kutcher

Walmart is Listening… to Ashton Kutcher 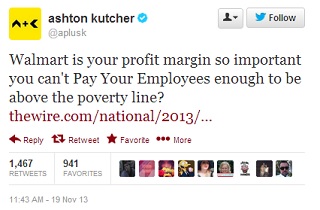 Retail giant Walmart has been getting lots of negative press this week over a food drive at one of its stores, for the benefit of its own employees. While the company has fended off criticism from the media, and others, on Twitter with a repetitive canned statement, there’s one voice who out-juices all the activists and consumers on Twitter, and CNN, ABC, and NBC: Ashton Kutcher. The Two and a Half Men actor got Walmart’s Twitter feed into an extensive engagement in which they even allowed that “We know we can always get better as a company.”

It’s unfortunate that an act of human kindness has been taken so out of context. We’re proud of our associates.

But when actor and sometime conservative hero Ashton Kutcher chimed in, the chain took notice:

Ashton Kutcher: Walmart is your profit margin so important you can’t Pay Your Employees enough to be above the poverty line? http://www.thewire.com/national/2013/11/wal-mart-holds-food-drive-its-own-struggling-workers/71717/ …

Walmart Newsroom: .@aplusk It’s unfortunate that an act of human kindness has been taken so out of context. We’re proud of our associates in Canton.

@aplusk We know you believe in opportunity like we do & we’d love to talk to you more about it. http://youtu.be/pKID1FRFPKc

Ashton Kutcher: @WalmartNewsroom you had 17 billion in profits last year. You’re a 260 billion$ company. What are we missing? http://finance.yahoo.com/news/walmarts-employee-food-drive-reveals-120012647.html …

Ashton Kutcher: @WalmartNewsroom Walmart does a lot of great things but it needs to be a leader on this issue as well.

@aplusk We think you’re missing a few things. The majority of our workforce is full-time and makes more than $25,000/year.

@aplusk Lastly, every year, we promote about 160,000 people to jobs with more responsibility and higher pay.

@aplusk We know we can always get better as a company. This year we’ve made providing more opportunities for our associates a top priority.

Ashton Kutcher: Walmart should be the leaders not the low water mark http://www.ilsr.org/new-study-finds-walmarts-miserly-wages-cost-taxpayers/ …

It is a true sign of the times that powerful news organizations can be rebuffed by a giant corporation like Walmart, but an actor with a large (over 15 million) social media following simply cannot be ignored.