‘We Are A Better Nation Than This’: Dem Candidates Rip DHS on Reports of Deportation Raids 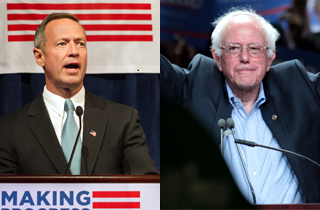 A new report that the US Department of Homeland Security plans to raid and deport hundreds of families who illegally entered the U.S. through the southern border sparked outrage from Democratic candidates Thursday.

O’Malley said the roundup reminded him of something Donald Trump would propose, adding the United States is “a better nation than this”:

A Christmas Refugee Roundup sounds like something @realDonaldTrump would concoct. Remember: Jesus was a refugee child who fled death gangs.

.@DHSgov holiday plans for raids to round up/deport Central American refugees fleeing death are wrong. We are a better nation than this.

In an extended statement, Sanders said he is “very disturbed” by the reports, insisting, “we need to take steps to protect children and families seeking refuge here, not cast them out.”

Very disturbed by reports that the government may commence raids to deport families who’ve fled here to escape violence in Central America.

We who are parents should ask ourselves what we would do if our children faced the danger and violence these children do?

We who are parents should ask ourselves what we would do if our children faced the danger and violence these children do?

It is not their kids who are going into war. It is your kids. You’ll forgive me, this is an emotional issue for me. https://t.co/c4GibSTOuM

And Hillary Clinton got involved in the backlash too: