What We Learned From the Milo Yiannopoulos Implosion
Opinion

What We Learned From the Milo Yiannopoulos Implosion 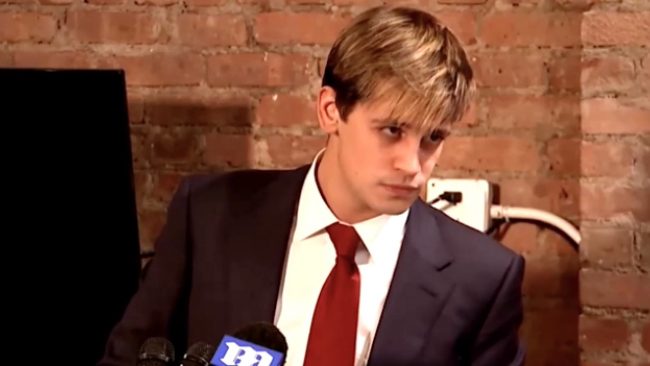 As a conservative who has been a critic of Milo Yiannopoulos, but who is also a free speech advocate (I wrote a book called “The Death of Free Speech” in 2005, but don’t worry, no one else read it either), I have been somewhat conflicted about his Icarus-like plummet this week. It all feels like the right conclusion was found, but via a rather odd and circuitous route.

The weirdest element of his remarkably rapid fall from grace is that it was all based on some comments he made about man/boy sexual relationships on an unknown Internet show which has been posted on YouTube for over a year. His name is right there in the title and the video had gotten about 60,000 views before it suddenly went viral over the weekend.

The video finally got noticed because “highlights” were packaged by the prolific conservative anti-Trump Twitter account “ReaganBattalion” after Milo had been announced as a keynote speaker at this week’s CPAC event. “ReaganBattlalion” also, in contradiction of Milo’s later claim of having been deceptively edited, tweeted out a link to the full video on Sunday night soon after the firestorm was ignited.

The reason that, much to the surprise of even “ReaganBattalion,” these videos went nuts on social media and in swift successive order caused Milo to lose his CPAC spot, his book deal and his editor position at Breitbart is that, as often is the case in these situations, a “perfect storm” existed.

The CPAC speaking slot was already controversial because of the fact that many conservatives, including myself, view Milo as a showman/actor who provokes people solely for his own benefit and not in the advancement of conservatism (whatever that is in the era of Donald Trump). Milo was also in the news because of his appearance that Friday on Bill Maher’s HBO show and his confrontation with comedian Larry Wilmore.

Maher is now, despite having been rather soft on Milo during his interview with him, taking credit for his demise, and he is, at least indirectly, right about that. Much like Icarus, the man from Greek mythology with wings of wax which melted when he got too close to the Sun, Milo simply got to be too big of a media personality for who he really is to be able to remain completely hidden and viable.

Had he not gotten his book deal and gone on Real Time as a featured guest, he never would have risen past the level of a day-time panelist at CPAC (trust me, having been one of those, there are lots of people on that lowly level of the media food chain who have skeleton’s in their closet at least as horrifying as Milo’s). Without that, then there is no pressure point to provoke this kind of instant outrage and not enough people care about him for major media players, like Ana Navarro and Jake Tapper, to bother sharing the incriminating videos in a way which got them noticed.

It should also be noted that another part of the “perfect storm” working against Milo here was his support for President Trump (since he was an editor at Breitbart, I guess that is kind of redundant), who, it is amazing to think, backed Milo on Twitter just two weeks ago. There is no doubt that this heightened the intensity among many real conservatives who wanted to see Milo taken down a few notches. It also robbed him of any of the normal PC protection that the left would provide a flamboyant gay man who says he was a victim of child sexual abuse (though abuse that, in the video he also says, was good for him).

The obvious question here is how in the world did Milo become as influential as he did in the first place without anyone having noticed this — or his many other outrageous statements — previously? This remarkable oversight is yet another example of how large the holes in the media’s modern vetting system really are, which I guess was already proven by the fact that Trump became the Republican presidential nominee without even the public knowing about the infamous “Access Hollywood Tape.”

Adding to the perplexity of the oversight of this long-ago-planted-land-mine is the notion that, given how effortlessly Milo articulated his theory that man/boy sex can be good for thirteen year olds is, this was not the only time that he has stated this position. I have spoken to the man behind “ReaganBattalion” (he doesn’t want to be known publicly, partly because of threats he is receiving from Milo supporters) and he says that he has been sent evidence indicating that the assumption on my part is, indeed, correct.

This happened mostly because Milo is an excellent actor who was able to take advantage of a vacuum within the conservative media. Since Andrew Sullivan turned into an Obama-loving conspiracy nut, there was no one to play the role of “flame-throwing gay conservative.” With better looks, a sharper wit, and a British accent, he played the character extremely well and rode the Trump/Breitbart wave to the celebrity that he clearly so desperately craved.

However, a commentator who is constantly doing “shtick” can easily lose sight of what it is that they really believe, what’s actually appropriate for public consumption, and what might get a laugh in one venue but come back to haunt them in another. In short, that is what I believe happened with Milo.

I don’t think that he really thinks that sex between thirteen year-old boys and older men is a wonderful thing that should be promoted by serious people in society. I mostly believe him when he said he felt that his own experiences gave him a license to joke about the impact of such circumstances (as an aside, I actually think his comments had some value in providing insight into what I suspect, as a product of Catholic school, was the root cause of most of the Catholic Church scandal: ephebophilia committed by gay priests on boys who they sensed were homosexual).

So, in the end, Milo effectively got caught in a trap created by the very same qualities which made him somewhat famous. If he wasn’t mostly an actor pushing buttons of provocation and manipulation purely for his own selfish agenda, he would never have made such obviously offensive statements in a public venue. He wouldn’t be nearly as well known today, but his career also wouldn’t now be in such disarray.

As the rock band “Green Day” once famously wrote, “It’s something unpredictable, but in the end is right. I hope you had the time of your life.”