When Horrible People Fight: Al Qaeda Wants Ahmadinejad To Stop Being A 9/11 Truther 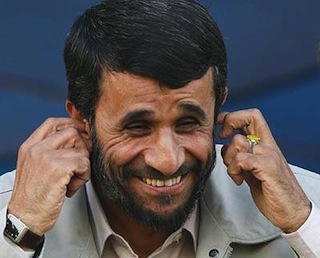 Recently, while speaking to the UN General Assembly, Mahmoud Ahmadinejad stated a bunch of terrible stuff including his belief that the 9/11 attack was actually perpetrated by the US government to create cause to invade Middle Eastern countries. Obviously, this kind of talk is a direct slap in the face to every man, woman, and child who lost their lives on that day.

Apparently though, that also includes the, uh, terrorists themselves. It turns out that al Qaeda is pretty annoyed the Iranian president said these things. It makes sense if you think about it. I mean, say what you will about al Qaeda but those guys put a lot of work into that thing.

The comments from the terrorist organization apparently appeared in an article in their English-language magazine, Inspire.

“‘The Iranian government has professed on the tongue of its president Ahmadinejad that it does not believe that al-Qaida was behind 9/11 but rather, the US government,’ the article said, according to Iranian media. ‘So we may ask the question: why would Iran ascribe to such a ridiculous belief that stands in the face of all logic and evidence?’

Al-Qaida also accused Iran of hypocrisy over its “anti-Americanism”.

The article said: ‘For Iran, anti-Americanism is merely a game of politics. It is anti-America when it suits it and it is a collaborator with the US when it suits it, as we have seen in the shameful assistance Iran gave to the US in its invasion of Afghanistan and in the Shia of Iraq, backed by Iran, bringing the American forces into the country and welcoming them with open arms.'”

Oh, snap! Did you hear that, Mahmoud? Al Qaeda just called you an anti-American poser! Are you really gonna let them be frontin’ like that?

Clearly the only way to settle this is in a fight to the death. Winner dies first.