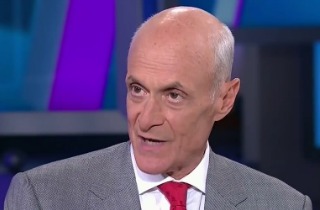 The head of the investigative committee for one of Hillary Clinton‘s biggest past controversies is now giving her his nod for the presidency.

Michael Chertoff was George W. Bush‘s former Secretary of U.S. Homeland Security, and it was he who led the Congressional investigation of the Clintons’ Whitewater real estate deals back in the 90s. This weekend, however, Chertoff spoke with Bloomberg, and said that even though he has some reservations about the former Secretary of State, he will endorse her for being the most experienced candidate on national security.

“I realized we spent a huge amount of time in the ’90s on issues that were much less important than what was brewing in terms of terrorism,” Chertoff said. “[Clinton] has good judgment and a strategic vision how to deal with the threats that face us.”

Chertoff said that Clinton’s Whitewater decisions are vulnerable to scrutiny, as is her private email server, though neither one disqualifies her from the White House. Chertoff and other high-profile Republicans have been critical of Donald Trump‘s lack of foreign policy knowledge in the past, though Chertoff decided to officially back Clinton after watching how the mogul handled the debate and its aftermath:

“Not only did he seem at the debate to lose his temper, but to get up at 3:30 a.m. and reach for your smartphone is to me a hysterical reaction. If you’re president, the button you reach for is not the Twitter button; it’s the nuclear button.”