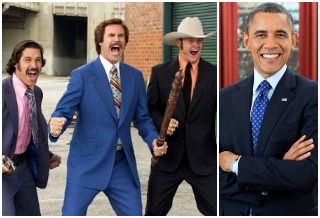 One of the more enlightening anecdotes to emerge from the all-out Anchorman 2 media blitz came out today in an interview writer/director Adam McKay did with Paste magazine. In his spoiler-free answer to a question about the new film’s elaborate gang fight scene, McKay revealed just how close he and Will Ferrell came to securing a appearance by President Barack Obama, along with similar long-shots Bill Clinton and Oprah Winfrey.

Paste: Without spoiling anything for the readers, how difficult was it to secure some of those cameos in the gang fight?

McKay: We drew up a wish list of all the people we wanted and what we ended up with was basically our wish list. It has never happened before. Usually you do your dream casting and you get 30 or 40 percent of the people. In this case they all said, “Yes.” It was insane. When they started saying, “Yes,” I said, “Wait a minute, shall we try crazier ones?” So we actually tried Barack Obama, Oprah Winfrey, and Bill Clinton. Bill Clinton was immediate quick decisive, “No.” Oprah Winfrey’s person was like, “You never know…” There was like an hour where we were like, “She might do this!” Then we got a call saying, “No, she’s not doing it!” Then the Barack Obama one was crazy. We actually had a semi-connection to the White House. The connection said he might do it if he gets to say something with a point of view. The joke was going to be he was from C-SPAN, and he was going to say this thing about how C-SPAN is going to change news because it’ll be stripped down. It will just be the truth and you’ll see, someday everyone will be watching C-SPAN—that was going to be the joke. Then of course someone underneath him was like, “Are you fucking crazy? No he won’t do it. He’s the President.”

You’ll have to check out the new film to see the updated brawl that could have featured President Obama, but for now you can watch the classic original version below: