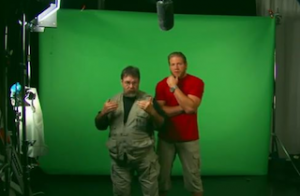 The WWE’s Jack Swagger® and Zeb Colter® have hit back hard at Glenn Beck after Beck referred to them as “stupid wrestling people” on his show. In a video posted online Friday, the two men perform a promo as their over-the-top Tea Party-inspired personae, before breaking character to address Beck’s comments directly.

Pulling back to reveal the green-screen artifice of what they do, Wayne Keown (Colter) and Jake Hager (Swagger) explained to Beck that they are merely entertainers, with no larger political agenda.

“We aren’t in the political business, or the immigration business. We are in the entertainment business,” Keown said. He went on to attack Beck directly for failing to give his audience credit when it comes to the general understanding that pro-wrestling is fake. “Many of your followers are WWE fans and they understand the difference between reality and entertainment,” he added. “Are you out of touch with your audience Glenn? Or are you just a ‘stupid political commentator?’”

Keown once again extended the invitation for Beck to appear on Monday Night RAW this coming week, offering him five minutes of unedited air-time to offer a rebuttal. Beck has already rejected the offer once, saying, “Unfortunately I am currently booked doing anything else.” Will Beck’s desire for self-promotion over-take his reluctance to degrade himself by appearing with the “stupid” WWE? We’ll have to wait until Monday to find out.

Watch video below, via WWE: