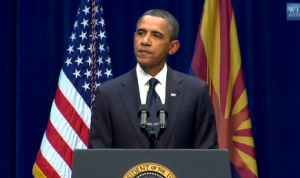 On a smaller platform than some may have hoped, President Obama wrote an op-ed in today’s Arizona Daily Star launching his intention to tackle serious and “common sense” gun control. Two months after the Tucson, Arizona shooting tragedy, Obama seems to be searching for middle ground on the issue in an effort to protect “our children’s futures.”

Obama first reaffirmed he has no intention of confiscating guns:

Now, like the majority of Americans, I believe that the Second Amendment guarantees an individual right to bear arms. . . . And, in fact, my administration has not curtailed the rights of gun owners – it has expanded them, including allowing people to carry their guns in national parks and wildlife refuges.

And Obama discussed his awareness of how difficult it will be to approach an issue that both sides feel so passionately about:

Then Obama outlined a few practical beginning steps, including “enforcing laws that are already on the books,” strengthening the National Instant Criminal Background Check System, rewarding states that provide the best data, and making the background check system “faster and nimbler” so that criminals can’t escape it.

Concluding, Obama stated, “I want this to at least be the beginning of a new discussion on how we can keep America safe for all our people.” Given that NRA supporters often fear any increased federal gun control legislation could be a slippery slope towards greater restrictions in the future, and given that anti-gun activists will likely think Obama’s first steps here don’t go far enough, it’s likely many will be eager to participate in the “new discussion” Obama is starting.

Check out the full op-ed at the Arizona Daily Star.