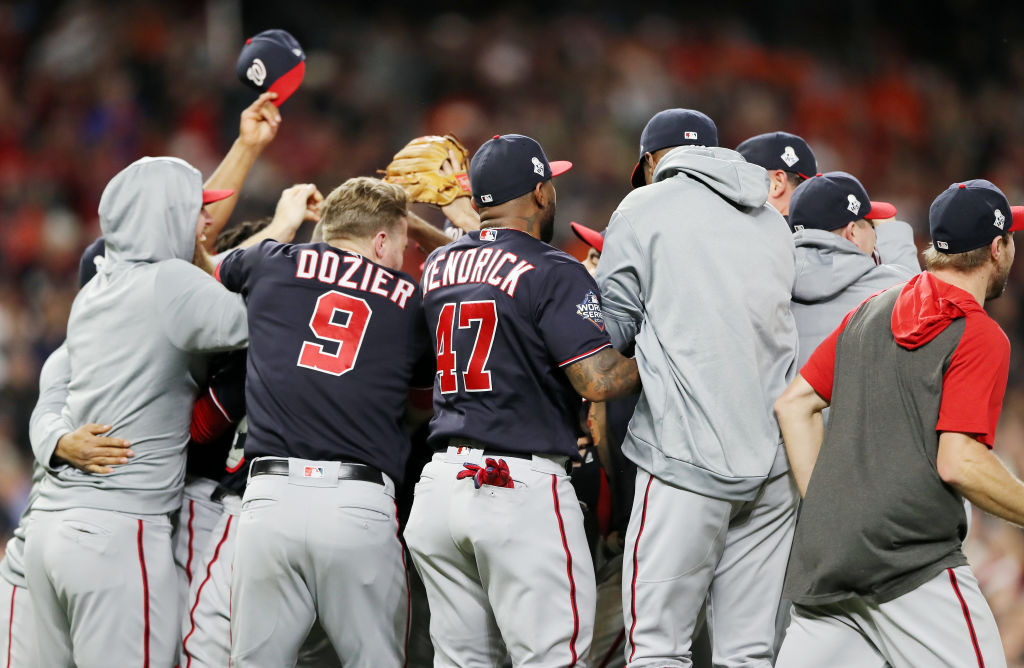 The 2019 World Series champion Washington Nationals did what no one else could — unite the right, left, and center of the DC media bubble in a single, rapturous chorus of celebration.

After being 12 games under .500 on May 23rd, Washington’s hometown team went an incredible 86–43 the rest of the way to claim a seven-game World Series victory in unprecedented fashion — by winning all four games on the road. Countless bold-face names from the capital’s press corps hitched along for the ride (even if a few were admittedly bandwagon fans).

The unanimity of the rejoicing was striking for a town that rarely agrees on anything, and also served as a meta-joke about the insularity of the Washington press corps.

What an amazing season! #finishedthefight So cool to see the @nationals in action! #worldserieschamps https://t.co/ORFIgUD2Kp

So cool! He is smiling down from the upper deck — was great to see you at the games! #FINISHTHEFIGHT and #finishedthefight https://t.co/dk5upDQNQV

Also don’t forget. Before Game One of the #WorldSeries Alexa called it perfectly. Nice work Alexa. Congrats to my Washington @Nationals https://t.co/TxJZb8o6j4

#Nats started out 19-24, there were talks of the coach being fired. Now look at them, world series champs. Long-suffering #Mets fans gotta look on with envy, but know that is could happen to them too in a hurry. Just gotta #StayintheFight pic.twitter.com/IaLiMwhz9w

The Bullpen in DC celebrates!!! pic.twitter.com/EbGCufRjVN

Thank you, Nats, for showing us how to combine grit and passion into success. https://t.co/HyT0OAdBUS

Because 6 is the magic number. https://t.co/DqxNxdCA1X

God I just love this team and I’m so happy for them. What fight, what spirit, what swag. They earned every second of this.

Max Scherzer, you did it buddy. I love you.

There are three moments that I will treasure forever:

It happened and I was here for it.

The Nationals just had the kind of season that Hollywood makes movies about.

The Washington @Nationals are World Series Champions. What a team. What a story. What a beautiful gift to my old hometown of DC. Thank you for letting this unrepentant Yankee fan come along on your magical ride. #STAYINTHEFIGHT #THEYWONTHEFIGHT #FIGHTFOROLDDC pic.twitter.com/RdBZJl0UWI

Thinking of my old boss Tim Russert tonight. A Nats fan and season ticket holder who loved that baseball had returned to the nation’s capital. #WorldSeries2019 pic.twitter.com/7aJN0Q36ZN

Guys… the hero dog starts the day getting a medal from Trump and ends it celebrating with the World Series champs. pic.twitter.com/RjyoWhNd08

More than a few wags took time out of the celebration to throw a sharp elbow at G/O Media’s Jim Spanfeller, mocking his leadership after the mass revolt of disaffected Deadspin staff on one of the biggest sports days of the year.

Others sought to just bask in the joy of the moment and put aside the political rancor and divisions, for one night at least.

Washington DC is a wonderful city full of wonderful people and anyone who tells you differently needs to get out more. Rock n roll. What a great night.

When Strasburg leaves @Nationals for another team for more money, will Washington still like the decision to shut him down for his good?