Trump Rally Chants of ‘Send Her Back’ at Ilhan Omar Roundly Condemned: ‘Flat Out Bigotry’ 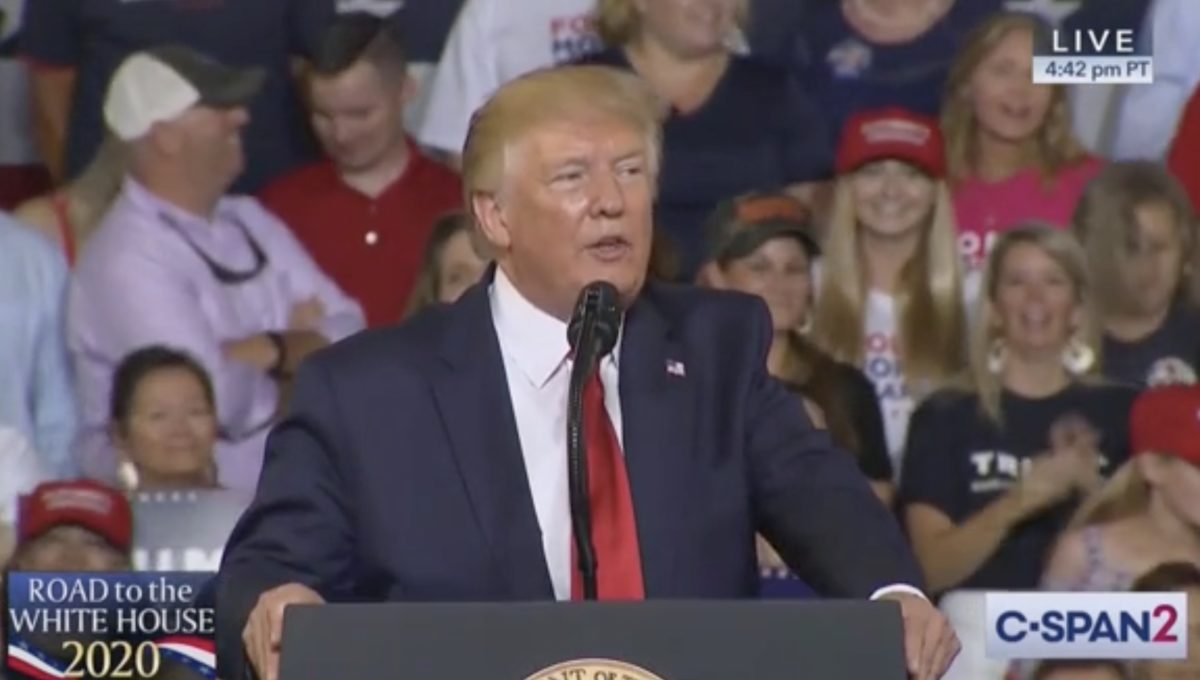 At President Donald Trump’s North Carolina rally Wednesday night, as POTUS tore into Congresswoman Ilhan Omar, the crowd erupted in chants of “send her back!”

Omar herself posted some words from Maya Angelou in response:

The chants were widely condemned on Twitter, from liberals to conservatives who called the spectacle bigoted:

The move from “lock her up” in 2016 to “send her back” today is the move from strongman lawlessness to white nationalism as your operating principle. Welcome to the 2020 campaign.

The bigoted mob chanting “send her back” tonight is significant.

The crowd at Trump’s rally chanting “send her back” after the President viciously and dishonestly attacked Ilhan Omar is one of the most chilling and horrifying things I’ve ever seen in politics.

I just saw the “Send her back” chant video from the Trump rally and it’s more horrific than I could have imagined. There’s a young girl who looks to be 12, chanting zombie-like with the rest of the crowd, taught to hate by the president of the United States

It’s flat out bigotry. And every Republican should condemn this bigotry immediately. Stop this now.

Any president with a shred of decency would immediately stop a crowd chanting “SEND HER BACK! SEND HER BACK!” and correct their ignorance.

Instead we have a president who encourages and embraces this kind of hate from his most loyal followers.

You should be denouncing @realDonaldTrump’s racism, not celebrating it. You should be saying that a mob chanting “send her back” about any American, much less a member of Congress, does not reflect Tar Heel values. You are not fit to represent my state. https://t.co/R2mDRsfw8w

I’d say to my friends in DC going along with Trump. Imagine how this video of the President leading a white mob in a “Send Her Back” chant targeting a black refugee is going to look in your kids high school government/history classes. This hatred has got to be stopped.

.@IlhanMN makes our country and our Congress better. The hate Donald Trump is stoking in North Carolina tonight is odious and un-American. https://t.co/w6UsYwuLGb

Check my feed. I’m very tough on Omar bc she deserves it, on the merits.

I am sickened by the hate-laced “send her back” chants. Shame on every person who participated.

POTUS has a responsibility to put an end to it. He alone has the ability to do so. Chant “vote her out.”

Anyone who follows me knows that I cover the far-left and that includes Rep. Ilhan Omar (D-MN) and I’m aggressive in my reporting which comes from a conservative angle

With that said, chanting “send her back” at Omar is not good

Keep in mind, I am one of her harshest critics