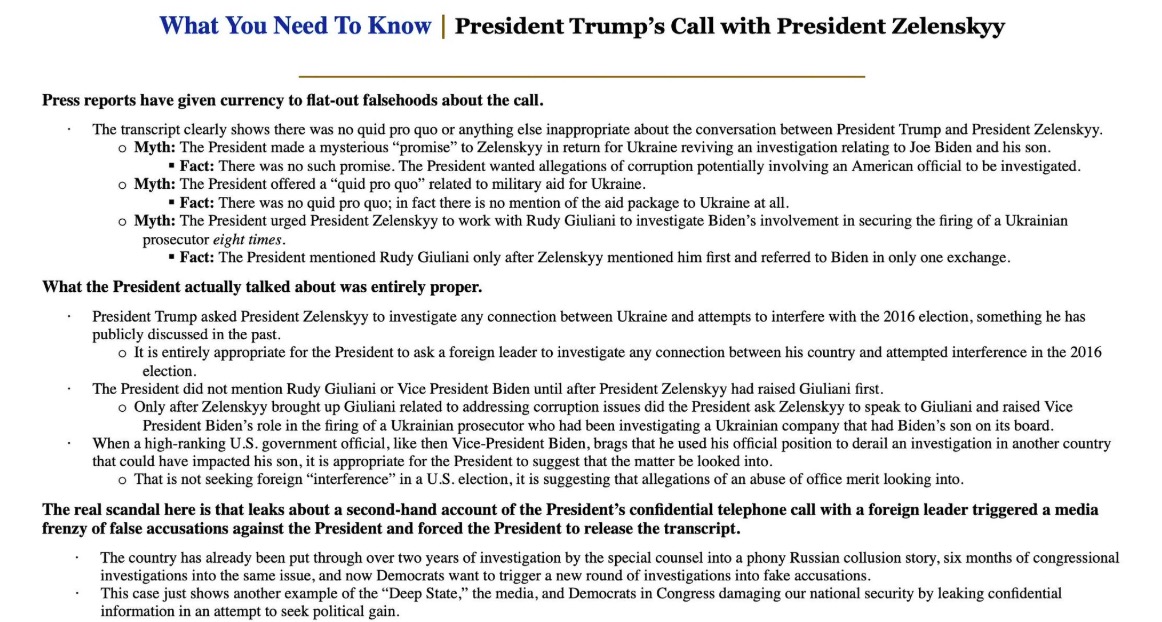 After President Donald Trump authorized the release of a document detailing his controversial July 25 phone call with Ukrainian President Volodymyr Zelensky, the White House accidentally issued a set of talking points to House Democrats that were meant for Republican lawmakers.

Shortly after the memo was sent to Democratic members, including House Speaker Nancy Pelosi (D-CA), the White House sent a subsequent email attempting to “recall” the list of arguments defending Trump against allegations of wrongdoing related to the call, per Politico congressional reporter Andrew Desiderio.

White House aide Tori Symonds “would like to recall the message, ‘What You Need To Know | President Trump’s call with President Zelenskyy [sic],” stated the follow-up.

Leading the Trump administration’s list of talking points for the Ukraine call, in which the president repeatedly asked Zelensky to launch an investigation targeting former vice president and leading Democratic presidential candidate Joe Biden, is the claim that the media has pushed “flat-out falsehoods” about the conversation.

Also included in the email were several so-called “myth[s]” and “fact[s]:”

“Myth: The president made a mysterious ‘promise’ to Zelenskyy [sic] in return for Ukraine reviving an investigation relating to Joe Biden and his son. Fact: There was no such promise. The President wanted allegations of corruption potentially involving an American official to be investigated.

Myth: The president offered a ‘quid pro quo’ related to military aid for Ukraine. Fact: There was no quid pro quo; in fact there is no mention of the aid package to Ukraine at all.”

The White House went on to state that Trump’s phone call with Zelensky — whose name is misspelled throughout the email — was “entirely proper.”

“The real scandal here is that leaks about a second-hand account of the President’s confidential telephone call with a foreign leader triggered a media frenzy of false accusations against the President and forced the President to release the transcript,” the author added, before also purporting that the whistleblower “complaint was handled absolutely by the book.”