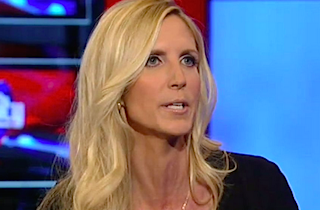 Last week, Ann Coulter complained to Sean Hannity that Fox News only talks about immigration “a tenth as much” as they talk about ISIS. Now, she has turned that argument up to 11 with a column for WorldNetDaily titled “For death by ISIS you have to go out, but illegals deliver!”

“ISIS has killed four Americans — in Syria. We’re not exactly talking about another 9/11,” Coulter writes. “Here’s a tip: If you don’t want to be killed by ISIS, don’t go to Syria.”

By contrast, she continues, “illegal aliens have killed, raped and maimed thousands of Americans — in America. If you don’t want to be killed, raped or maimed by illegal immigrants in your own country, I have no tips for you. There’s nothing you can do. You’re on your own. Good luck.”

Coulter accuses U.S. politicians of being “obsessed with cleaning up the rest of the world, while we’re getting our clock cleaned at home.”

She goes on to reference a handful of alleged crimes committed by undocumented immigrants, but does give any sourcing to back up claim that they have killed “thousands of Americans,” nor does she give a timeline for that figure.

“ISIS is not at our doorstep,” Coulter writes. “Illegal immigrants are not only at our doorstep, but millions of them are already through the door, murdering far more Americans than ISIS ever will.”

“Couldn’t we please focus on Americans for a bit? Can’t a Republican Congress do anything to stop the surge of foreign criminals, viruses and parasites crossing our border?” she asks. “Will politicians ever stop gassing on about what’s happening 7,000 miles away and worry about us?”

As President Barack Obama reiterated in a town hall event last night, he gave Congress a year and a half to pass a comprehensive immigration reform bill that would have both strengthened border security and given otherwise law-abiding immigrants a path to citizenship. But when they failed to do so, he enacted his executive action that shifted deportation priorities from families to criminals.

As for Coulter’s claims about undocumented immigrants committing an outsize share of crimes, the Immigration Policy Center found, they are actually “less likely to commit crimes or be behind bars than the native-born, and high rates of immigration are not associated with higher rates of crime.”