Ben Shapiro and Transgender Reporter Get Heated on HLN: ‘You’re a Little Man!’ 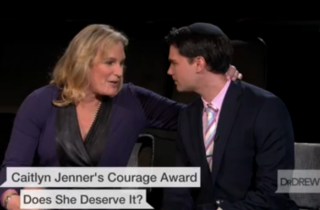 What happens when you sit Breitbart’s Ben Shapiro next to transgender reporter Zoey Tur for an HLN debate about Caitlyn Jenner and her ESPYs Courage Award? As you can imagine, the conversation turned rather ugly, with threats of physical violence and repeated insults being hurled.

Asked by host Dr. Drew Pinsky whether Jenner deserved the ESPY award after “courageously coming forward, for having been an athlete of great prowss, and now fighting a new battle,” Shapiro spilled his disdain for the entire concept of transgenderism: “What exactly is the battle? I mean, self-definition is what you do, and my baby’s doing it at 18 months old. I was unaware that you get a medal for it.”

Later on, Tur, who was born Robert Tur, responded:

Did she deserve the honor? Probably not. Is she brave? Of course she’s brave. All those years invested as the sports legend, to come out transgender is horribly difficult. It is the most difficult thing you can do. I’ve been overseas, I’ve flown helicopter missions, surveillance missions, I’ve been shot, stabbed. Being brave is being yourself. And being transgender is about the bravest thing you can do.

And when Shapiro refused to call Jenner and Tur by anything but male pronouns, the segment went straight down the tubes.

“Forget about the disrespect,” Shapiro said, in the full clip first reported by Breitbart. “Facts don’t care about your feelings. It turns out that every chromosome, every cell in Caitlyn Jenner’s body, is male, with the exception of some of his sperm cells.”

“We both know chromosomes don’t necessarily mean you’re male or female,” Tur replied, and then put her hand on Shapiro’s shoulder. “So you don’t know what you’re talking about, you’re not educated on genetics.” That prompted Shapiro to ask: “What are your genetics, sir?”

And off we go. “You cut that out now, or you’ll go home in an ambulance,” Tur shot back while holding Shapiro by the back of his neck. The rest of the show’s guests then explained to Shapiro how he knew full-well his use of “sir” was meant to be inflammatory, but he was not moved. “It’s not a matter of aggressively insulting,” he said. “The entire discussion is whether we are embracing mental illness and delusion as a society.”

When the conversation resumed after a commercial break, the fire hadn’t subsided. Tur told Shapiro, “You’re consumed with hatred,” after the conservative commentator denied any ill will towards the transgender community. “You’re a little man,” she added. “Little boy.”

Watch the debate below, in two parts, via HLN’s Dr. Drew On Call: