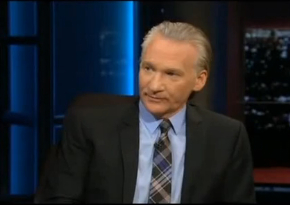 Those who accuse the once libertarian Bill Maher of becoming too much of a liberal apologist might want to clean their ears. Maher made a Juan Williams-esque confession on his program when he apprehensively noted that Mohammed has just become the most popular baby name in Britain. “Am I a racist to feel alarmed by that?” Maher asked his panel. “Because I am. And it’s not because of the race, it’s because of the religion. I don’t have to apologize, do I, for not wanting the Western world to be taken over by Islam in 300 years?”

His normally boisterous crowd fell silent as the panel responded to Maher’s admission.

“If you’re with NPR,” the conservative Margaret Hoover chimed, “You’d be fired.”

Reihan Salam, a conservative analyst with a Muslim name, also seemed irked by Maher’s comments, noting that he “has some uncles named Mohammed” that are “pretty decent guys.”

Of course, it’s not the name that Maher fears, but the religion. (Any of them, in fact — Maher’s qualms with religion of any sort, Islam or not, are long-standing and well-documented.) Hoover further stoked Maher by claiming that the U.K is saddled with a “far bigger problem” than baby names: Sharia law, which she said is creeping into England.

“Then I’m right,” Maher said, taking her for her word. “I should be alarmed. And I don’t apologize for it.”

And we believe him there. After all, this is the same man who got his previous show Politically Incorrect cancelled when he asserted that the 9/11 attackers were “not cowardly.”

Watch the clip below from Real Time With Bill Maher to see the latest comment he’ll probably be talking about for a while (and to see Zach Galifianakis try to cut the tension).