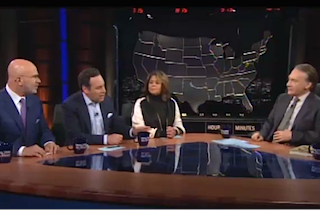 During his opening monologue on last night’s Real Time, Bill Maher noted that Republicans are “outraged” over the apparent mismanaging of the Department of Veterans Affairs. “They say, ‘How dare you lie about caring for the people who got hurt in the war we lied them into?'” Maher joked. Later, during the panel portion of the show, Maher got more serious about the issue, asking former George W. Bush speechwriter David Frum if he regrets driving the country into war now that he sees what’s happening it our injured veterans.

Unlike many other conservatives, Frum echoed Jon Stewart when he said, “If you’re going to fix big, complex institutions that fail, you can’t make them a soap opera about the president of the moment, whoever that president is.”

“As someone who wanted us to get into a war that was a war of choice, do you feel bad about it at all?” Maher asked, referring to Frum’s work advocating for the Iraq War under Bush. “Do you feel bad about the fact that it’s all too easy to talk about war and get into war and say it’s going to be a cakewalk, but then they’re cakewalking with artificial limbs.”

Frum responded by saying he doesn’t think anyone who sends soldiers into war, including President Barack Obama, “took lightly that decision and doesn’t know what the human cost is.” The United States has gone to war many times over the years, and in Frum’s estimation, “it’s usually been successful and it’s usually been right.”